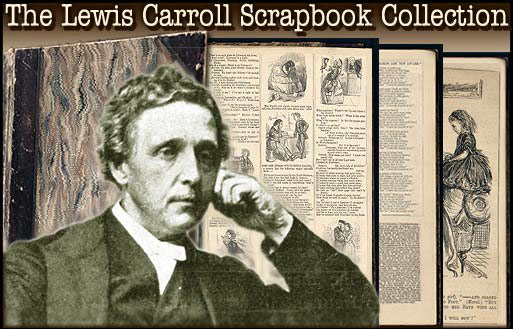 A new online exhibition that will intrigue followers of Lewis Carroll has opened on the Library of Congress website. Carroll, of course, is the author of Alice's Adventures in Wonderland and Through the Looking-Glass. They are the works of a most unusual mind, reality warped into fantasy that still sucks us in today. However, that mind lived in a very different reality from the one we now know. Lewis Carroll lived in 19th century England, passing away slightly before the dawn of the 20th. The input that went into the brain which turned out Alice is very different from what we experience today.

Now along comes the Library of Congress, with some very considerable help from Edward Wakeling, to give us a glimpse of the things that intrigued Carroll. Carroll kept a scrapbook, probably from 1855-1872. Alice was published in 1865 and Through the Looking Glass in 1871. All the while, Carroll remained behind the scene, not seeking the notoriety which would have come to the writer of these books. In reality, "Carroll" was the Reverend Charles Lutwidge Dodgson, mild-mannered mathematics instructor at Oxford, who only became Superman to the world of literature when he put on his Lewis Carroll suit.

Carroll's scrapbook has been sitting in the Library of Congress for years, but was never accessible to anyone but a select few who knew about it and were interested. One such person was Edward Wakeling, who learned about the scrapbook in 1985. Even then, it took another 17 years before he actually laid his hands upon it. But Wakeling was evidently fascinated by this scrapbook, so much so that he decided to make it available to all. So began the digitization project, where Wakeling and others created digital files for all of the book's pages that could be uploaded to a website. It was an approximately 200-page scrapbook, but Carroll only pasted items on 63 of those pages. Those and a few loose ones comprise the exhibit.

Wakeling and his friends went one step further in creating this exhibition. Since the scrapbook consisted of items cut out of newspapers and magazines, they went back to locate the originals, so we would know where Carroll found them. They were not always successful, but in most cases they provide the original source for the pieces Carroll saved. The earliest dated to 1834, just two years after Carroll's birth. Wakeling opines that Carroll received it from his father. The last was from 1872. With 26 more years to live and 130 blank pages to fill, evidently Carroll tired of keeping a scrapbook, but he did hang onto it.