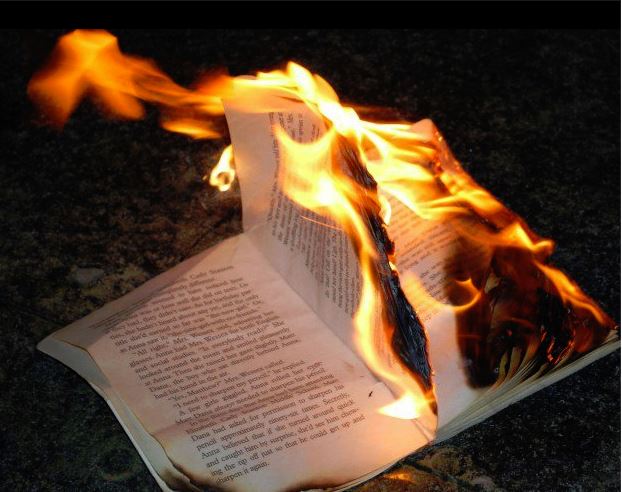 Image from the Manchester Library Friends Facebook page leaves little doubt how they feel about destruction of books.

Two years ago, we reported on a reprieve several hundred thousand library books were granted from a sentence of destruction (click here). It turns out the reprieve was temporary. In late 2012, the Friends of the Manchester (England) Central Library won a stay of a plan to dispose of several hundred thousand books library officials deemed to be expendable. The library was undergoing a major renovation and officials felt this was the time to get rid of volumes of little used books to make room for other services when the work was completed. The Friends and others, such as Britain's poet laureate Carol Ann Duffy, protested. The result was the books were instead put in storage, the final decision postponed for another day. That other day has come and gone, and so have the books.

A Freedom of Information request submitted by the Friends of the Library recently revealed the fate of the books previously on reprieve. Around 240,000 of them were shipped off to Revival Books. Revival Books takes books no longer wanted by libraries and others, sometimes in large volumes. They try to find homes for those that are wanted. However, with large volumes, there is often no taker and those books are recycled, in an environmentally friendly manner, but that still means they are pulped. While the Manchester Library did not specify what Revival Books did with their 240,000 volumes, the suspicion is that most were destroyed. It's hard to imagine what else could have been done with such a large volume, and if a taker were found to preserve them, one suspects the library would have said so.

Library officials justified the action on the grounds that the books were either duplicates, damaged, or of little use. Maintaining books on the shelves is not without significant cost. A member of the city council echoed this opinion, describing the books as “duplicated, outdated, or otherwise obsolete.” This did little to assuage the library friends. They issued a statement saying, “Library staff are custodians and public servants; for them to have quietly and systematically disposed of 240,000 publicly owned library books with no public notification or consultation whatsoever, is, we think, morally reprehensible.” The Friends also stated, “What has been lost are the irreplaceable collections of reference and lending non-fiction books, covering every conceivable subject, giving that extraordinary breadth and depth of subject coverage that only long established libraries can provide.”

This is a sad situation, and one that is going on at libraries everywhere, just usually not so visibly. Financial and space realities sometimes dictate a culling of the herd. Fortunately, the emergence of digital copying has allowed for text to be preserved and made readily available even if the physical copies are no longer around. Still, the upset by the Friends of the Library is understandable. They won a hard-fought reprieve two years ago, only to find the books had been destroyed without further notice. An announcement of the plan before the books were sent away was called for. The Library may have made the right decision, but the Friends, as citizens of the community, had a right to state their case to that community, and pose alternatives, be that using space targeted for other purposes for these books, perhaps even asking citizens to raise additional tax revenues to pay for their preservation. Undoubtedly, having to debate the decision in public before implementing this irrevocable decision would not have been pleasant for councilors or librarians, but sneaking the books off in the night, “with no public notification or consultation whatsoever,” does not feel right. These books did, after all, belong to the public.