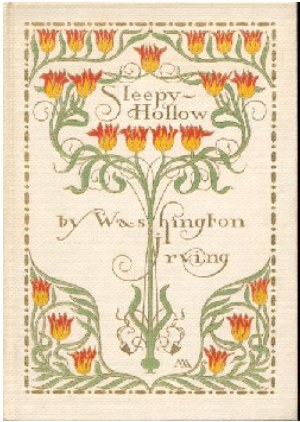 Title page from Henry Van Dyke, Music and Other Poems. New York: Scribner’s, 1904. Signed by Margaret Armstrong in the plate.

Armstrong’s designs are varied and range from an adaptation of the flowing two-dimensional Art Nouveau style with original typography, exquisite fine designs in gilt (such as the Music cover mentioned above) to heavily embossed and colored stained glass bindings. There is extensive use of images from the natural world; Armstrong in fact studied botany and wrote a field guide to Western flora (Margaret Armstrong, Field Book of Western Wild Flowers, New York: Putnam, 1915.) She collaborated from time to time with her sister, Helen Maitland Armstrong. Still active at the end of her life, Armstrong wrote well-received works of biography and mystery.

Armstrong’s books are still relative bargains — many nice copies are available, some very inexpensively, in common venues, such as ABE (www.abebooks.com) and eBay (www.ebay.com). These interesting and important designs are accessible to collectors of modest means and will continue to give pleasure to anybody who enjoys reading and owning a beautiful book.