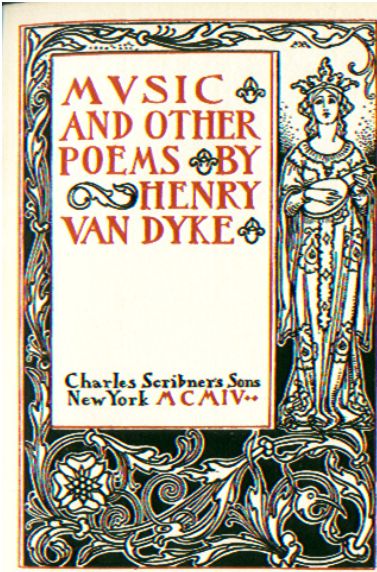 Title page from Henry Van Dyke, Music and Other Poems. New York : Scribner's, 1904. Signed by Margaret Armstrong in the plate.

This weekend I was, as usual, working, going over some boxes of books that had just arrived, and a slender volume caught my eye. It was bound in green silk, with the word “Music” in a stylized script encircled by a wreath of doves, a violin in the center with two horns to either side, and a flurry of ribbons ending in small hearts, in gilt. The title page was also pretty —printed in red and black again with stylized script, the “u” in “Music” a roman “V”, the “R” a delicate toe–pointing, slightly trembling Art Nouveau marvel, surrounded by a design in black and white, partly in reverse, of entwined flowers and vines, finished off with a muse in flowing robes playing what looks to be an early stringed instrument, perhaps a lute. And then the expected “MA” at the top, indicating that this was the work of one of America’s most gifted book designers, and one of the earliest recognizable women book artists, Margaret Neilson Armstrong (1867-1944). This particular book was one of a series Armstrong designed for works by Henry Van Dyke and published by Charles Scribner’s Sons, clearly more notable for their design than their content.

One thing led to another, and I found myself perusing The Boston Book Company’s (www.bostbook.com) online catalogue of its Margaret Armstrong collection (asking price $19,500.00). With over 300 titles, the catalogue is a handy guide to Armstrong’s work, both in books bearing her name as author and/or illustrator, as well as books containing decorative bindings, titles, and internal decorations, signed and unsigned, as well as books that might be attributed to her.

Armstrong lived in Greenwich Village, on West 10th Street, virtually her entire life. She was born to an old New York family of means (descended, according to one writer, from Peter Stuyvesant) who had her privately educated and trained by working artists. According to Charles B. Gullans and John Espey, Armstrong collectors and authors of the primary bibliography of her work (Margaret Armstrong and American trade bindings: with a checklist of her designed bindings and covers. Los Angles: Department of Special Collections, University Research Library, University of California, Los Angeles, 1991), most of her work was done for Scribner’s — some three hundred book designs — between 1890 and 1940. One of her most famous series, the works of Myrtle Reed, was done for Putnam. Armstrong was also hired by publishers in New York and Chicago, including Macmillan, Harper, Bancroft, McClurg, Dodd Mead, and Bobbs-Merrill.