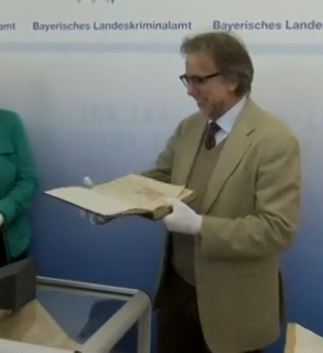 Italian Prosecutor Vincenzo Piscatelli displays one of the recovered books.

Over 500 stolen books are making their way back to their home in Italy, just one of many pieces to one of the largest book theft cases ever. The books are estimated to have a value €2.5 million (US $2.85 million). They include works by Galileo, Copernicus, and Kepler, with dates from the 15th - 17th century.

The works came from the Girolamini Library in Naples, a church affiliated institution. The one-time director of the library, Massimo de Caro, took advantage of the fact that it was little used to transport books out during the night. It is still not known exactly how many books he removed, but it is estimated in the thousands. None of these were recent paperback novels, but all antiquarian titles of significant value. De Caro had a network of associates who helped him remove the books, hide their identity, and move them on to various locations around the world. It is doubtful that all will ever be recovered.

As often happens in such cases of runaway greed, De Caro eventually became a little too careless. The library was a mess, with books strewn about the place. A researcher noticed the deplorable condition and told others. It led to some questioning of workers there, who spoke of strange goings on. In time, police figured out what was going on and a scandal, reaching up to high positions in the government, broke out. A couple of years later, De Caro was convicted and sent off to prison for seven years.

As part of the investigation, police tracked a large cache of books to an auction house in Munich. The auction believed the books had come from the estate of a couple from northern Italy. In a shocking development two years ago, police raided the auction house and arrested its director, Herbert Schauer. The shocked firm severed all ties to Mr. Schauer. They cooperated fully in the investigation that has led to the return of the 543 books. Meanwhile, Mr. Schauer was also convicted and sentence to five years in prison in Italy, a sentence that is still pending.

German officials reported they went through each book carefully to establish its ownership before concluding that all 543 had come from the Girolamini Library. Italian prosecutor Vincenzo Piscitelli, who came to Munich to arrange for their return, stated that this was an important recovery in the case, but that they still don't know how many books were stolen.