A Record Price for a Book Sold on AbeBooks 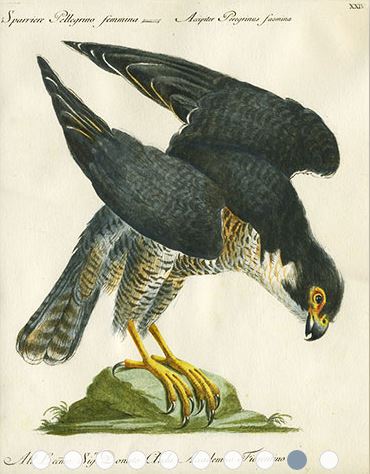 An illustration from Storia degli Uccelli...

AbeBooks, the world's largest book listing site, set a record price for a book purchased through their site recently. They didn't just set a record, they blew the old one away, with a price almost three times as much as they had ever seen before. It was their first six-figure sale, with someone clicking a button on their computer and thereby spending $191,000. The internet does seem to be coming of age.

The book comes from what is a very popular niche today, though it is not a common book in the field. It is one of those magnificent illustrated ornithologies, not Audubon or Gould, but an 18th century precursor. The title is Storia degli Uccelli...Ornithologia methodice... part of a long title that translates, essentially, to A Natural History of Birds. It was published in five volumes from 1767-1776. The text was written by the Florentine physician and ornithologist Saverio Manetti. The illustrations were created by Lorenzo Lorenzi, and Violante Vanni, one of the rare women to achieve such a position in those times. She was described by a contemporary as a “woman of very low extraction but of great skill.” The book stresses that all birds were drawn from life, though some of those “live” birds were stuffed. Still, it means they were accurate representations of the birds' appearance, not something drawn from memory or imagination.

This was considered one of the finest bird books published as of the date, and one of the most spectacular of 18th century Italian works. It is considered a forerunner to the great ornithology books that were published in the 19th century.

Commenting on the sale, Richard Davies, merchandising manager at AbeBooks said, “We're thrilled to have sold such a valuable book for one of our booksellers. We have been expecting a sale of this magnitude for some time. A small number of people are comfortable spending large amounts of money online.”

The previous highest price paid on AbeBooks was $65,000, a milestone achieved twice. Once was for a copy of The Hobbit, a first edition from 1937. The other was a copy of Areopagitica, a 1644 pamphlet by John Milton, writer of Paradise Lost, defending freedom of the press before Parliament. Three other books also reached the $60,000 mark on Abe: Der Naturforscher, a 13-volume natural history set published from 1774-1804, Utopia, a 1518 fourth edition of Sir Thomas More's classic about an ideal state, and Poems with elegies on the author's death by John Donne, a 1633 first edition of his first collection of poems.