In The News: A Couple of Book Burnings 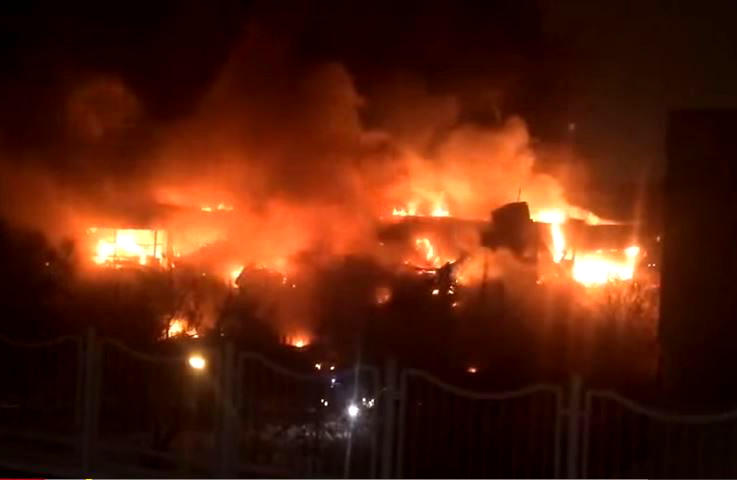 Flames rip through Moscow's Institute for Information on Social Sciences.

Among the atrocities committed by the self-styled Islamic State, ISIS, or whatever its name, book burning sounds rather tame. The horrific slaughtering of people conducted by this group long ago revealed its evil nature to all but those whose hearts share in their evil. Nevertheless, the news of their destruction of books is yet another reminder of the connection between tyranny and book burning. This is a reminder to anyone who doubts the importance of books to a civilized society. If they weren't of critical import, the uncivilized would see no cause to destroy them.

According to the Associated Press, militants broke into the library in Mosul, Iraq, and took around 2,000 books off in six trucks. The books mostly covered a variety of seemingly noncontroversial subjects, such as sports, health, culture, science, and children's books. A man who demanded anonymity for fear of reprisals told a reporter one of the militants said, “These books promote infidelity and call for disobeying Allah. So they will be burned.”

A few days later, militants broke into the University of Mosul's library and burned hundreds of science and cultural books in front of the students. However, not all of the books from the libraries have been burned. It is believed that those that are of value on the black market were preserved for their monetary value, money trumping principles among the unprincipled.

Finally, a few days ago, ISIS supporters detonated bombs planted in the Mosul library. Early reports estimated 8,000 books and manuscripts were destroyed in the ensuing fire, though some believe the number may be far greater. The Mosul Library's website now gives only a message “This Account Has Been Suspended.”

This is hardly the first time in history invaders have destroyed books in Iraqi libraries. The Mongols dumped many books into the Tigris River during the 13th century. More recently, during the chaos following the overthrow of Saddam Hussein, residents hid ancient texts in their homes, but with threats of death this time from the ISIS militants, residents may be less willing to take on such risks. It is believed that many century-old and more books and newspapers have already been destroyed.

There was a much larger book burning in Russia. Estimates are that 1-2 million books and documents were damaged or destroyed. However, the circumstances of this book burning were far different. These books were consumed by a fire that roared through the upper floors of the main library of the Institute for Information on Social Sciences, part of the Russian Academy of Sciences, in Moscow. The fire struck on the last day of January and took a full 24 hours to extinguish. By the time it was, some 2,000 square meters of space had been completely destroyed, with as many as 2 million items either destroyed or damaged. Material on the top floor was, for the most part, charred beyond salvage, while items on lower floors, damaged by water, may yet be recoverable. Institute Director Yury Pivovarov was quoted by Russian online media RT as saying, “After the water damage, thanks to modern technology, it is possible to save the books. But after the fire...We cannot turn ashes back into paper.”

Vladimir Fortov, head of the Academy of Sciences, told Russian media, “This is a great loss for science. It is the world’s largest depository of this kind, similar, probably, to the Library of Congress. Here we have the materials which cannot be found elsewhere, and all humanitarian institutions used this library.” Some material was unique, and most items had no electronic copies. Fortov commented that the remains of the library “resembles Chernobyl.”

The library was founded in 1918 and possessed around 14 million books and documents, including the only Russian collection of extensive material relating to the League of Nations, the United Nations, and UNESCO, reports from the U.S. dating back to 1789 and from Britain back to 1803, and many ancient and modern Russian and eastern European texts. Mr. Pivovarov said, “The library will need more than just a restoration, it needs complete reconstruction.” He estimated the project will take years.