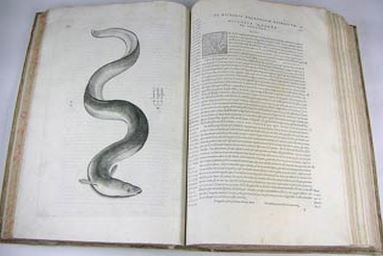 Abebooks.com has released its list of the 50 most expensive sales on its website during 2014. We all know that some very high prices are paid on occasion for books, but through a click on a website? It turns out some surprisingly high amounts are spent that way, absent face-to-face contact. This past year, 50 items achieved prices of $9,000 or greater, with a simple click of a “buy” button.

Before we get to the ubiquitous Top 10 list, there were numerous fascinating items to be found between 11 and 50. There is a copy of Alice's Adventures in Wonderland, illustrated by a man who depicted worlds as strange as Alice's, Salvadore Dali. We have a postcard from Mohandas Gandhi and a signed photograph of the Apollo 11 crew, inscribed to Prince Bernhard of the Netherlands (Queen Juliana's husband). There is an incomplete copy of Romeyn Hough's American Woods, which came with wafer-thin samples from American trees, and a very complete copy of Voltaire's Oeuvres Completes de Voltaire – all 70 volumes.

The first substantial textbook on differentiated calculus appropriately achieved a high number. A 1584 book on witchcraft, and questioning its persecution, might have come in handy in Salem a century later. A signed Hobbit, signed by Tolkien, not a Hobbit, made the list. Mark Twain's first book, his Celebrated Jumping Frog, hopped onto the list. Then there is Metallotheca, which is not about a heavy metal rock band, but mineralogy and such as it was understood centuries ago.

9. A Farewell to Arms, an inscribed first edition by Ernest Hemingway to a friend. $18,000.

8. Alice's Adventures in Wonderland, another copy of the 1969 Dali illustrated edition, but this copy was signed by the artist. $20,000.

3. Aquatilium animalium historiae... Italian Ippolito Salviani's book of Mediterranean fishes, the first book to use copper-engravings, rather than woodcuts, to depict marine life. $22,638.

2. Das Kapital, Karl Marx's 1867 treatise on economic concerns that changed the world in ways he probably never would have imagined. $40,000.

Sure, AbeBooks is a great place to go to get a reading copy of an old book you like, but there is much more here, including fine rare and antiquarian material, highly collectible.

Here is a link to see the complete list of AbeBooks 50 most expensive items for 2014: www.abebooks.com/rare-books/most-expensive-sales/year-2014.shtml