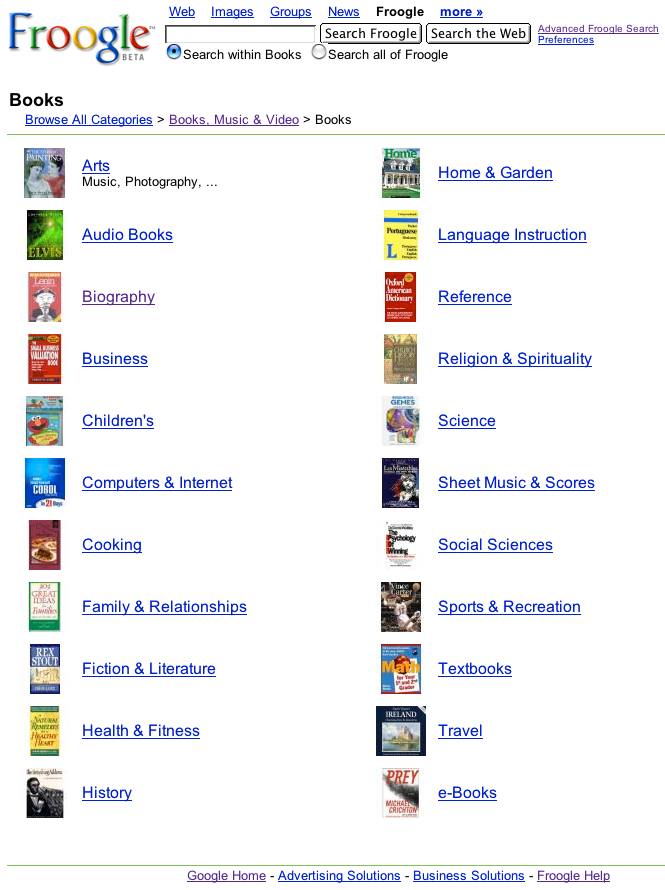 You can find millions of books through a Froogle search

There is a way to have your listings picked up by the world's most popular and powerful search engine, and shown on one of the most heavily trafficked websites in existence. They estimate that "millions" of people go there everyday. They will even pick up listings from your own website if you wish. So what does this site charge for providing this incredible level of visibility? 8%? 15%? 20%? Guess again. The answer is nothing. Zero percent. No percentage points, no listing fees, no cost-per-click. Nothing at all.

Welcome to Froogle, the shopping search service put out by the world's most popular search engine, Google. If all of this sounds too good to be true, it isn't. Google is an odd duck. They seem to be almost entirely focused on creating better products, not on making money from them. That may sound like a formula for disaster, but in Google's case, it has worked. They have made their primary product, their search engine, better than any of their competitors', thereby generating a huge audience. While other search engines focused on ways to sell listings, or at least advertisements that looked suspiciously like listings, Google focused on providing better search results. As a result, Google became far and away the most popular search engine. When they finally did decide to draw advertising revenue from their searches, they placed the ads to the side where viewers could clearly tell they were ads, not search results. It didn’t matter. Google's reach had become so great that advertisers rushed to buy this space because Google had by far the largest audience.

On December 11, 2002, Google launched its shopping site. In Google's typical, understated style, there was no great fanfare. While there must be thousands of shopping sites out there, most claiming to be the greatest place ever to buy whatever they are selling, Google made no outrageous claims. Promotion was minimal. They called their shopping site "Froogle", a clever play on the name "Google" and "frugal", and clearly labeled it as a "beta" site. "Beta" is simply tech talk for "still under development". To this day, Froogle is still labeled a "beta" site. Nevertheless, millions of books can be found through this site. Not as many books as can be found on Abebooks, not as many as on Alibris or Amazon, and naturally not as many as the meta book searches like AddAll can find, but Froogle is a force everyone in the book business needs to watch.

You might think this race is over. With the power of Google behind it, and the unbeatable pricing offered, it's just a matter of time before Froogle will dominate online book sales. Not so fast. In time, Google became far and away the most popular search engine. However, Google accomplished this by offering a clearly superior product. That cannot be said about Froogle, at least not yet. I would bet that most of you who are reading this article regularly use Google when you want to find information on the internet. I would also bet that few of you use Froogle when you want to find a book for sale on the internet. There is a reason. To understand why Froogle has not yet become the Google of internet shopping, you need to look at what Froogle is and isn't, what it does well and what it doesn't.