So you want to be a Wise guy 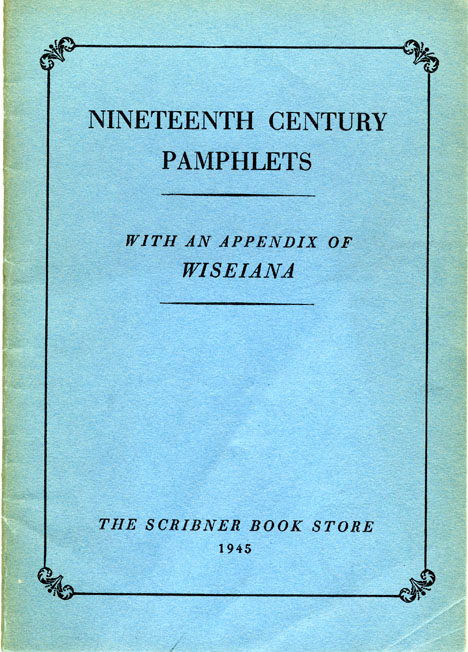 Scribner's issued this catalogue of Thomas J. Wise material in 1945.

It can be difficult, in collecting printed material, to know what to collect. The printed universe is enormous. Whether to define collecting ambitions by subject, period, author, type, style, place, event(s), some other factor or a combination of factors is a potentially complex decision often informed by luck and frequently enhanced by suggestions and guidance from knowledgeable dealers. Certainly the best collections are focused. Ask any auction house what they do best with and they will tell you focused, single owner collections. Many, arguably most, subjects are potentially very large. Here, by comparison, is a relatively small one: collecting material relating to Thomas J. Wise. Don’t know him? Read on. He’s a good investment.

Thomas J. Wise was a great collector of the English Lake District poets and other esteemed writers of the nineteenth century. They included George Eliot, Rudyard Kipling, William Morris, Dante Gabriel Rossetti, John Ruskin, Robert Louis Stevenson, Algernon C. Swinburne, Alfred Tennyson, W. M. Thackeray, William Wordsworth, and Edmund Yates. If imitation is the sincerest form of flattery, he certainly flattered them. Actually he went a bit further. He faked some of their early printings and then “discovered” them. Next, as an expert, he confirmed their authenticity.

He fabricated not books but early printings – pamphlets. He was an esteemed authority with a famous knack for finding previously undiscovered material. Much of the traffic in both the knowledge of these authors and their early printings passed through him or nearby and he must have experienced two feelings that when present in the same person spell risk and disaster. He could see that the market wanted more copies and he could see that the people who wanted them often didn’t have great knowledge. So he stepped across the line to forge copies to satisfy anxious and willing collectors and at the same time created a trading currency he then used to exchange his manufactured rarities for genuine items.

In 1934, while Mr. Wise yet lived, he was unmasked by John Carter and Graham Pollard in their scientifically conclusive investigation of his discoveries, a book titled “An Enquiry into the Nature of Certain Nineteenth Century Pamphlets.” What did him in? Watermarks and type faces. In many cases he used watermarked paper that didn’t exist as early as the printed dates on his forgeries. In other cases he used type faces that weren’t developed until later. After his death others would establish that he had a partner in his crimes: H. Buxton Forman who had the good sense to die before these forgeries were uncovered. They were always going to be caught. Mr. Wise simply lived too long.