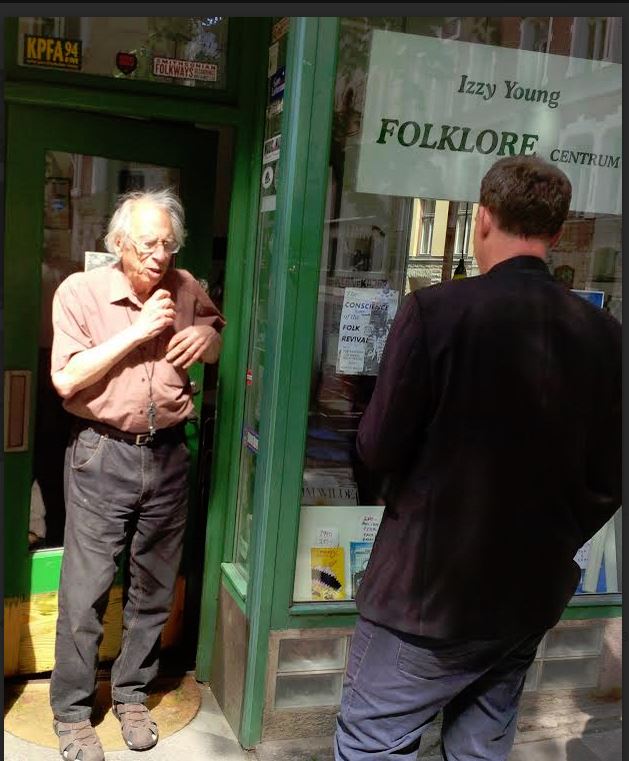 Izzy Young is still at it at his Folklore Centrum in Stockholm.

A pair of unrecorded songs written by Bob Dylan shortly before he turned from unknown struggling Greenwich Village artist to the spokesman for a generation are being offered for sale at Christie's New York on December 4. Offered are original manuscripts/typescripts annotated by the young Dylan. They were given to the legendary Village bookstore owner Israel “Izzy” Young. Young was to a generation of new artists in the late 1950's and early 1960's what those artists became for the rest of us a few years later. He was their mentor. Young, now 86, carries on in Stockholm, Sweden to this day, but as back then, he is still short of money. Hence, he is selling these symbols of a generation over 50 years after they were given to him by Dylan.

We thank John Schulman of the Caliban Bookshop in Pittsburgh for some background. Schulman, a lover of folk music, visited Young in Stockholm this summer and helped get these manuscripts to Christie's. He reports that Izzy, who was described by Dylan in his autobiography as having “a voice like a bulldozer,” hasn't changed in the 40-plus years since he moved from New York. As always, he teeters on the edge of financial catastrophe, somehow carrying on despite a world that has never quite recognized or rewarded him as it should.

In 1961, Dylan first walked into Izzy's bookstore. Young described Dylan as intense and quiet, someone who inhaled the radical and musical books on his shelves. Dylan wrote of Young, “To him, folk music glittered like a mound of gold. It did for me, too.” One suspects that for Young, the “gold” of folk music might have had more of a financial tinge than it it did to Dylan, but no matter. Unlike Dylan, Young never became rich from it, though he devoted his life to its promotion.

Young was so impressed by Dylan's work that he promoted a concert by the still unknown folksinger, at Carnegie Hall, no less. A couple of years later, you would have had to pay a scalper a fortune to obtain tickets to such a performance. In November of 1961, only 53 people came. The price was $2. Dylan made $10 from the show. This is how greatness begins.

One of the two songs is a tribute to Young's bookstore. Among the lyrics to Talking Blues, later published as Talkin Folklore Center, are these:

“You get a bumper and I'll get a fender

We'll go down to the Folklore Center

You get a daft and I'll get dizzy

What did the fly say to the flea

Folklore Center is the place for me.”

Young had the lyrics printed up as a broadside. The original manuscript is signed, “Bob Dylan '62 of Gallup, Phillipsburg, Navasota Springs, Sioux Falls and Duluth.” There is also a typescript.

The other song is a typescript, annotated by Dylan (and Young) for the song Go Away You Bomb. From the following year, 1963, it is unpublished. Young told Dylan he was looking for lyrics for a book of anti-nuclear war songs. Dylan returned the following day with this 29-word composition. It was in May of this same year that Dylan released the album Freewheelin' Bob Dylan, containing such songs as Blowin' in the Wind and A Hard Rain's a-Gonna Fall. Dylan would forever be the voice of his generation.

Here are links to view the lot descriptions:

Go Away You Bomb