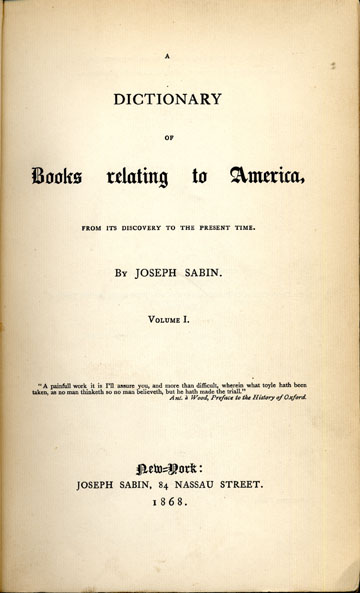 
The first important collection of books catalogued by Mr. Sabin was that of the comedian, W. E. Burton, in 1860. In 1864 he catalogued the collection of the old Scotch antiquarian, John Allan, of pleasant memory. The title on the cover of this catalogue was not composed by Mr. Sabin. In his opinion it was awkwardly constructed, and, not being willing to father it, he signed himself as "Compiler of this catalogue, the cover excepted."

Among the one hundred and fifty or more libraries which Mr. Sabin is said to have catalogued was that of the Shakespearean scholar, Richard Grant White, who remarked, as the result of his observations, that if anybody thought that bibliography was an easy subject he should serve an apprenticeship under Joseph Sabin.

The book auction sales at which Mr. Sabin officiated included some of the most important that have occurred in this country. The last at which he presided was the great Brinley sale. This was divided into five parts, and the sale of the third part was set for March, 1881, but was postponed on account of Mr. Sabin's ill-health. His family had already been informed by his physician of the fatal character of his illness. On April 4th Mr. Sabin began the sale, and conducted it to a satisfactory conclusion. On this occasion he had the pleasure and high bibliopolistic distinction of selling the only copy of the Mazarin Bible that has ever been brought under the hammer on this side of the Atlantic. The book was bought by the late Hamilton Cole for $8,000, and the sale created a sensation in the book-buying world, which was revived when the two volumes again appeared at auction in the dispersion of the collection of Mr. Brayton Ives, and were taken to Chicago at a ransom of $14,800.

The preparation of the Dictionary was begun about 1860. The prospectus was issued in December, 1866, and the first part was published in 1867. It continued to make its appearance in parts at irregular intervals until the death of the author. It was his "old man of the sea." Early morning hours, the small hours of the night, and stolen moments in cars and on shipboard were devoted to it. At Mr. Sabin's death eighty parts, describing over fifty-eight thousand lots, had been issued, bringing the work down in alphabetical order to the letters Pa. The manuscript left unpublished is now being revised by Mr. Wilberforce Eames, of the Lenox Library, and thirty-six additional parts have so far been printed, completing the work as far as the word Smith. In his process of revision Mr. Eames occasionally must meet with the handwriting of the founder of the institution he serves, as Mr. Lenox was especially interested in this particular work of Mr. Sabin, and rendered him valuable assistance by bringing him titles of rare books in his own collection, which were unobtainable from any other source.

Mr. Sabin was a genuine lover of books and a patient, painstaking student of bibliography. He was a better bibliophile than he was a merchant, and his customers would often find him more eager to discuss the bibliographical points of his literary wares than to effect a sale of them. It is not surprising that he should disrelish having his dictum called in question, and that he sometimes met an assumption of superior knowledge with a show of impatience. A youth once brought him for sale a volume of the Mexican Boundary Survey, published by the United States Government. Mr. Sabin told him that it was not perfect, but should be in two volumes. The young man insisted that the book was perfect until Mr. Sabin closed the discussion by saying jocosely, "Young man, if that work was contained in one volume it would make a book as thick as your head."

Thirty years ago the art of bookbinding was not receiving in this country the attention now bestowed upon it. A step in advance is credited to Mr. Sabin, to wit, the substitution of calf for the cheaper and less durable sheepskin previously so extensively employed by American binders.

Mr. Sabin died in the harness. Against the advice of his physician, he undertook the auction of the third part of the Brinley Library, and his labors in connection with it may have hastened his death, which occurred at his Brooklyn home on Sunday, June 5th, 1881. His funeral services were conducted by the Rev. Dr. Collyer, and he was buried in Cypress Hills Cemetery.

They say that there is no money in the old book business; however that may be, there is certainly in this, as in any other honorable pursuit, something quite as much to be coveted as financial success, and that is the regard and good-will of one's business associates. These Mr. Sabin enjoyed. Mr. John Pyne, his near neighbor for many years, said of Mr. Sabin at the time of his death, that he was the acknowledged head of his profession, and was loved and appreciated by all who knew him; and sums up a pleasant tribute to the memory of his friend in these words: "His love for rare books passed into knowledge which he used for the benefit of all who had the pleasure and profit of knowing him."

JOHN BRADBURN AND OTHERS
AMONG the Nassau Street "bookshops of olden time," whose alluring signs no longer salute the eye of the passing bibliophile, was that of John Bradburn, who came to this country in 1820 from County Westmeath, Ireland, where he was born in 1805. He began his career as a vender of second-hand books some ten years later than William Gowans, and in the same humble way. Armed with a basket filled with books of travel and works on navigation he invaded the wharves and ships of the city, and drove a thriving trade with ships' captains and mates just home from a cruise and with money burning holes through their freshly lined pockets.

Mr. Bradburn's first place of business was on the southeastern corner of Fulton and Nassau Streets. In 1852 or 1853 he removed to the northwestern corner of Ann and Nassau Streets, where he remained until he retired from active business in 1868. The old book shops of his day were commonly supplied with outside shelves and counters, which were laden with books and pamphlets. Here loungers with literary tastes congregated the livelong day, sipping knowledge as the bee sips honey, and forming a feature of New York City street life which has passed almost entirely away.