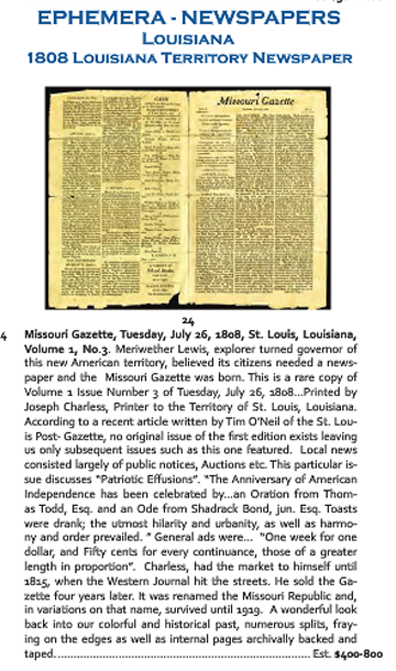 The Missouri Gazette, a not very obvious reprint

Recently, in a discussion with Bob Schwartz of Archives International Auctions, I mentioned that some of his upcoming material was going to be of interest to those who follow or subscribe to AE.  One item in particular seemed a very good fit for Eric Caren, a collector-dealer with very close to total recall of every scrap of printed-paper he has ever seen or heard about.  This skill has allowed him to spend his life living from discovery to discovery, periodically selling entire collections, at other times selling individual lots to collectors and institutions, and once in while sending material to auction as single owner sales.

So when I saw an early newspaper in the AI auction on October 25th, a copy of the Missouri Gazette dated July 26, 1808 with a St. Louis, Louisiana, Volume 1, No. 3, imprint I contacted Eric to let him know this item was on the horizon.

He responded immediately by mentioning he had looked at three copies during his career, one original and two reprints.  He had never owned one and said he’s be interested.  He then opened a link I had sent to him to the auction description and immediately said the two reproductions he had seen, he believed, were the same version he was seeing online, suggesting the possibility this was a later printing.  He further recalled that the paper used in the original differed from the paper used in the reprints so if no other way could be found to differentiate these examples the difference in the paper should.  He ended by suggesting I contact "the expert at Princeton” whose name he did not recall and I then contacted Joe Felcone [who is that guy]. the gracefully aging dealer-author-bibliophile who lives in Princeton who would certainly know the identity of the expert.

He did but updated the record saying that the person I needed to speak to was John Bidwell – and that he had been at Princeton but was now at the Morgan Library.  That rang a bell with me and I recalled taking to New York some manuscript material relating to early papermaking in the Hudson Valley that he had expressed interest in after I wrote about it in AE Monthly.  The Morgan has since subscribed to our services for some years.

Others describe John as the greatest expert on early American paper but he deferred judgment suggesting I contact John Hoover at the St. Louis Mercantile Library.  He’s the director.  He said they would almost certainly know.  I called Mr. Hoover and he agreed to search their copies and to get back to me the following day.  An hour later I had his reply:

The copy shown in the frontispiece to Viola Perotti’s “Important Firsts in Missouri Imprints” is from the Huntington Library and  reads for the line in question, “proceeded to Saint Domingo,”.

So it turns out the copy at auction was the 1908 reprint.  The AI description has been amended and Eric Caren did not bid.  But the item may still be of interest to some collectors once they understand what it actually is.  In the meantime it did not sell.  Had it been an original copy Eric felt it would bring up to 10 times the high estimate or perhaps $5,000.  Such unidentified reprints can slip into auction and dealer catalogues and fit seamlessly with the many authentic items around them.  In this case Dr, - - who runs AI, had agreed to the careful evaluation and revised the description once the item was identified.

I recall 15 years ago collecting the forgeries of Thomas J. Wise, they of course intended by Mr. Wise, and some say Buxton Forman, to pass as originals.  When I put the collection up for sale it immediately sold.  Such efforts are highly collectible if somewhat dangerous.

This Gazette is not a forgery but rather a reprint that fails to mention it is a reprint.  Someone could buy such a copy knowing what it is, and then set off on a decade of search and discovery to obtain the other versions of this early newspaper.  Or they could buy it believing it is the real thing, keep it in a safe for 50 years and pass it on to expectant heirs, who will be primed for the riches that lie ahead, until the next Eric Caren sends them down the path to examination, disappointment and heartbreak.

In the meantime other misidentified items are percolating in the collecting world.  Many, perhaps most slip through but because of the collegial effort of some of the best experts in the paper field this one did not.

Net-net the lesson of this story is that knowledge is all-important.  Auction houses, dealers, librarians and collectors obtain it through study and experience.  When they then share their perspective even the in-expert and unsophisticated, such as I am with newspapers, can quickly understand.