How Can Collectors Save $14 Million on Their Estate Taxes? 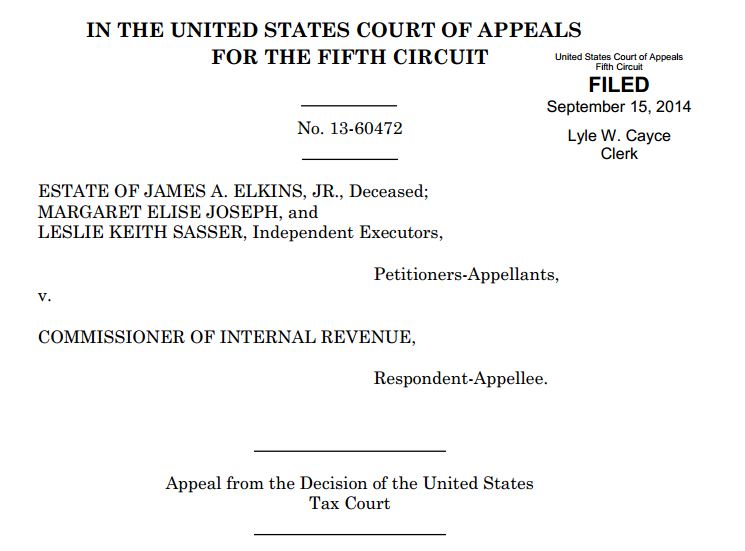 Well, for starters, you better begin with a lot of money. A recently decided appeals court case has been labeled a major victory for wealthy collectors with regards to reducing their estate tax liability. A $14 million judgment against the IRS can elicit a giddy response. Nonetheless, we recommend a dose of caution be taken by those who may see this as a slam dunk for high end collectors. Not everything is quite so cut and dried, and every estate is unique.

This notable case involved works of art, but there is no reason why it would not apply to books or other valuable collections. Lawyers, and we should all be thankful for lawyers, have found many ways for people of means to legally avoid part of their tax liability. If you have enough money to be subject to significant estate tax liability, you likely have sought out professional advice already, but if not, and you own valuable “collectibles,” here is a case of which you should be aware. But, please do not make any decisions based on this brief review. Seek professional help now!

James A. Elkins, Jr., died in 2006. His wife predeceased him. He was a very wealthy man. Mr. Elkins also had access to the best legal advice. His father was a founder of Vinson & Elkins, a law firm based in Houston but with offices all over the world. It is one of the nation's most prestigious law firms. Mr. Elkins was also an art collector, owning a few very valuable pieces of art, and many others of significant, though more modest value. Many pieces were hanging from the walls of his Houston home.

At this point we should note two of the ways you can reduce the amount of estate tax you owe. Mr. Elkins used both. One is to transfer some of that estate to others before you die. The other is to show why the assets in your estate are worth less than people might think. The lower the value of your estate, the less it will have to pay in taxes when you die.

In 1990, Mr. Elkins created a trust that effectively gave his 50% interest in three very valuable works to his children. Texas is a community property state, which means that (for the most part) each spouse owns a 50% share of the couple's property. When Mrs. Elkins died, he got back her 50%, but he did something else with her 50% share of the other 61 pieces of art. Those 61 would have gone to Mr. Elkins, and he would not have paid any estate tax. Transfers to your spouse on death are not subject to estate tax, but transfers to anyone else are. However, all of the value of those 61 pieces of art would have been subject to tax later when Mr. Elkins died.

Now, there is an exemption from estate tax for a significant amount of money. This is why the average person's estate is not subject to tax. Currently, that amount is a little over $5 million, though it was considerably less when Mrs. Elkins died in 2000. Nonetheless, Mrs. Elkins' exemption was about to be wasted. So, Mr. Elkins declined his wife's bequest of a portion of her 50% interest in those other 61 works of art, allowing it to go the secondary heirs, their children, instead. He declined just enough to fully use up her estate tax exemption, but not enough to generate any tax liability. This way, there would be less in his estate to tax when he died. The result was that each of his three children immediately received an 8.98167% interest in each of the 61 pieces of art. Yes, we are serious about that share percentage.

Now, you may wonder why Mr. Elkins didn't just give each child a couple of paintings until enough was given to reach the exemption threshold. The reason is that Mr. Elkins, or his lawyers, were way too savvy for that. They were creating something called a “fractional ownership” in each piece, and eventually, this would end up saving the kids $14 million. This is why, if you are wealthy, you need a good tax lawyer.

The parties (father and children) then did a few more things. They signed an agreement saying none of them could sell their fractional interests in the art without the consent of all of the others. They also created the terms of how they would “share” the art. Each party was entitled to hang the art on their wall for a percentage of the year based on their percentage of ownership. To exercise this right, they had to give the current possessor 30 days notice and pay all expenses in moving the art. So, one of the offspring could possess these items for 33 days per year, providing he/she wanted to pay the expenses involved in moving 64 pieces of valuable artwork. Not surprisingly, and to keep this an “arm's length” transaction, the children all agreed to lease their 33 days worth back to their father so they could remain on his wall.

Now if all this sounds like insanity, there is a reason for this madness. Its name is “fractional share discount.” It is a concept widely known among the very wealthy and their lawyers, though perhaps not by most others. It applies to all sorts of things – real estate, a family business, and art. What it says, in effect, is that the sum of the parts aren't worth as much as the whole. Here is how it works. Items in an estate are valued for tax purposes based on the market value – the price a free and independent buyer and seller would exchange to buy or sell the item. To determine the fair market value, the estate hired an appraiser from Sotheby's. Independent transactions take place at Sotheby's practically everyday. All parties, including the IRS, agreed his values were fair.

Now, here is where the fractional discount comes into play. Say one of these paintings was fairly valued at $10 million. What is an 8.98167% share of it worth? Did you say $898,167? Guess again. Courts have regularly said no. It is less. What can you do with this fractional share? You have no real control over the art. If you bought it, you would have to deal with the co-owners. Ideally, you would all get together to sell your interests jointly, so that the painting could be sold for the $10 million it is worth. However, one of the children testified that all three of them so liked these works, and they had such deep sentimental value, that there was no way they would ever part with their shares. On top of that, there was an agreement requiring all owners agree to a sale, each one having a veto power. Anyone buying a fractional share would have their money tied up, and no practical way to sell what they had purchased. And, if the fractional owner wanted to hang the art on his walls, the cost of yearly shipping for limited use would be prohibitive. Naturally, those shares are worth far less than $898,167 in the open market. The estate's appraiser said 50% - 80% less. That in turn means the estate is worth less and the estate tax it must pay is less.

Think about it. No art dealer is going to agree to sell such an interest in their gallery. One of the estate's witnesses testified that no auction house would sell such a fractional interest either. This is why the estate's valuation expert witness testified that the market value of the artworks, because of these fractional ownerships, was 50% - 80% less than it would be if held by a single owner.

The estate next brought in a legal expert who estimated the cost of legal help to go to court to try to force a sale because of the divided ownership. He estimated that would cost a ton of money, and for most of the works, the cost of forcing a sale was more than the value of the pieces themselves.

The IRS put all its eggs in one basket, a decision that turned out to be a mistake. It argued against the concept of a fractional share discount. Their argument, in a sense borrowed from the estate's claim, was that there was no recognizable market for fractional shares, since they never come up for sale at auction or elsewhere. Therefore, it reasoned, the standard valuation, as presented by the Sotheby's expert, should prevail, but with no discount for the ownership being divided. The first court to hear the case, the U.S. Tax Court, disagreed, and upheld the legitimacy of fractional share discounts. However, it then threw the Elkins' daughter's testimony back at the estate. She had testified how the children would never part with the artwork. The court took that perhaps a bit more seriously then the estate would have liked. They concluded that, if the children loved the art so much, they would pay up to be able to fully control it, and prevent the possibility of an outside fractional owner forcing a sale. Therefore, the Tax Court concluded the estate was only entitled to a 10% discount for the ownership being divided, rather than the 50% - 80% their expert had testified.

The Elkins' estate appealed the Tax Court's ruling to the Fifth Circuit U.S. Court of Appeals, and it is their ruling that has tax lawyers abuzz. The Appeals Court overturned the Tax Court decision. It upheld the part about fractional share discounts being legitimate, but overturned the 10% amount. Instead, it opted for the far greater discounts proposed by the estate.

While the Appeals Court felt the large discounts sought by the estate were “eminently correct,” which should hearten wealthy collectors and their lawyers, that wasn't the reason behind the reversal. They concluded that a legal case must be determined by the evidence presented. There was no evidence to support the 10% discount – the Tax Court just made that figure up based on its own beliefs of what is reasonable. The only evidence of value presented was that provided by the estate. The IRS, relying entirely on having the concept of fractional discount rejected, gave no evidence of what it believed a correct fractional discount would be. The estate's evidence of an appropriate discount went unrefuted. Since it was not, in the Appeals Court's eyes, an unreasonable amount, the Court concluded it had no choice but to accept the estate's conclusion. Slam dunk? For the Elkins' estate yes, but for the next case, not so fast.

Next time, the IRS can be expected to present its own estimate of a fair fractional discount, and it is likely to be less than 50% - 80%. It is unlikely the next estate will get a free pass. The Fifth Circuit Appeals Court may have found the discount “eminently correct,” but perhaps they would have been less certain if a reasonable contrary opinion were raised. Besides which, these cases are usually heard in Tax Court first. These judges deal with nothing but tax cases, and perhaps have a more jaundiced eye towards lawyerly schemes. Certainly, there was no purpose to this bizarre, convoluted transaction other than to reduce taxes. Courts tend to prefer a transaction have some legitimate other purpose. So, while there is nothing to lose and at least something to gain from sharing ownership of valuable collectibles with your heirs, you should not assume the discounts will always be quite so large. Maybe they will, and maybe they won't.

This case really should have been brought before Judge Judy. She would have had a more commonsense solution, like the one King Solomon applied so many years ago. If they don't want to pay their taxes, let the kids hang their 8.98167% of each painting on the wall.