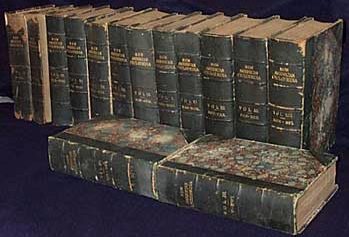 The New American Cyclopedia, not so new anymore

One of many interesting collections we have acquired recently is The New American Cyclopedia: A Popular Dictionary Of General Knowledge, a sixteen-volume set (of which we have fourteen). Published by D. Appleton & Company of New York from four years prior to the Civil War to a year afterwards (1857 to 1866), the volumes comprise over 11,000 pages of American and world history. Quite interesting to read, the aged volumes are decorative marble boards, leather-bound, with a raised band along the spine. On the front endpages of most volumes is the signature of the original owner, who noted where Bartolme Estaban Murillo, a Spanish painter appeared, to which it is assumed he was related.

As part of a collaborative effort, the primary editors were George Ripley and Charles A. Dana. Several writers also contributed to the volumes, including Karl Marx, founder of the Communist movement. Ripley, a Transcendentalist minister by trade, was also a notable literary critic and reviewer. Dana, a newspaper writer, war correspondent, and editor, would become the U.S. Assistant Secretary of War for the Lincoln Administration. Lincoln described Dana as "the eyes and ears of the government at the front" for his work as a field observer for the Army. Both men had been involved in organizing Brook Farm years before, a failed effort at communal farming in a utopian environment, which had supporters that included Ralph Waldo Emerson and Nathaniel Hawthorne, both noted within the volumes. After being in operation for six years, a fire destroyed many buildings in 1847, and the farm was disbanded.

Inside the volumes are a representation of the lifestyles in 19th century and earlier America, with detailed histories of famous and forgotten personalities, places, towns, cities, states, railroads, plantations, trades, industries, etc. throughout the world. Also, included are famous persons, authors, businessmen, politicians, soldiers, etc. Occupations, professions, business, and industrial methods are discussed as well.

Each U.S. State has many pages devoted to highlighting its history, population, railroads, industry, agriculture, way of life, and customs up to the time of publishing. Given the years of publication of each volume, in alphabetical order, some volumes have no reference to the War Between the States. Jefferson Davis, the future President of the Confederate States, is described at length as an American soldier and statesman. Later volumes issued after the war denote the Secession States. Cities such as Austin, Texas, are noted as having only 3,000 citizens. Nine pages are devoted to Boston, Massachusetts, including the notation that there are “383 physicians, of whom 25 are women…” (remember, this is 1857!). “Boston common is a small park of 48 acres, surrounded by an iron fence, erected in 1836, at a cost of more than $100,000. It is considered to date from 1634, and by a clause in the city charter it is made the public property forever, and the city cannot sell it, or change its character.”