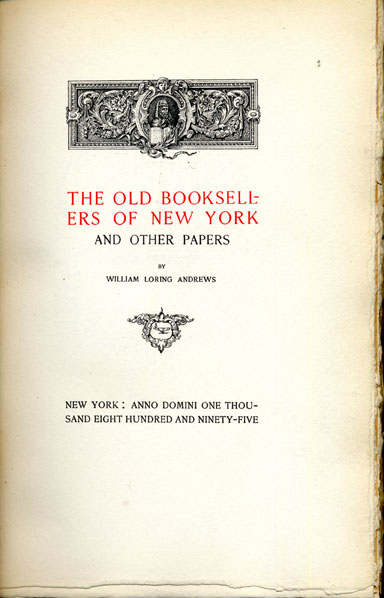 The Old Booksellers of New York and other Papers by William Loring Andrews. 1895

The full text of this book can be reached through this link.

This book, published in 1895, contains three primary essays:
The Old Booksellers of New York;
William Gowans
Joseph Sabin
John Bradburn and others
The First Illustrated Magazine Published in New York
The Early American Almanac
If you enjoy the minutia of book selling you’ll enjoy reading The Old Booksellers of New York and Other Papers, a brief (15,000 words or about one hour to read) account of some of the most important New York booksellers of the 19th century. It is written by William Loring Andrews and was published in 1895 when it was still possible to have known many of these men, and it was only men, first hand. The dealers he writes about are William Gowans, Joseph Sabin, John Bradburn and a small group of lesser lights whose memories yet linger in the communal recollections of the bookselling and collecting field and are still occasionally recognized in the arcane markings they sometimes penciled in books they offered. For those who collect not only books, but the collecting history of their books, such information is useful if hardly conclusive. It is one of the most interesting aspects of dealing and collecting.

Pride of place in the order of presentation goes to William Gowans, who, in 1828, at the age of 25 made his way to New York City from Indiana after a brief career as a long boatman on the Mississippi. He was a Lincoln contemporary and engaged in the same occupation on the same river and though they never met, their boats would have crossed paths. After first engaging in enterprises that now look to have been the ideal boot camp for the soon to emerge bookseller he spent his first New York year as a “gardener, stevedore, stone-cutter, news-vender and super in the old Bowery Theatre.” In 1829 for the first time he shows up in a New York City directory as a dealer and from then on, for the balance of his life he remains a bookseller except for a few years in the early 1840s when he conducted book auctions at 169 Broadway. His success is measured three ways; by his progressively improving address, by the increasing scale of his inventory and by the fame of his collecting clientele. On all accounts Mr. Andrews accords him high marks. “A full list of Mr. Gowan’s customer’s and casual visitors would go far toward supplying the material for a social register and a roll-call of the men of letters of the day.” Among them was Millard Fillmore who had a mania for signing his name and who may have become President only for the purpose of increasing the value of his signature. George Brinley was a client as were John Carter Brown, George Bancroft, Washington Irving and Benson J. Lossing to name only a few. Mr. Gowans also had the distinction of sharing a house with Edgar Allen Poe and left the report that Mr. Poe’s drinking was, like Mark Twain’s death, greatly exaggerated.

Mr. Gowans left to posterity numerous books in which he placed his penciled pricing code on page 25 as well as 28 catalogues, the first issued in 1842 and the last in 1870. Mr. Andrews damns the early catalogues by mentioning “the later ones were carefully compiled and neatly printed” while tiptoeing past the early efforts. Mr. Gowans went to his next, if not higher, calling on January 30, 1871.