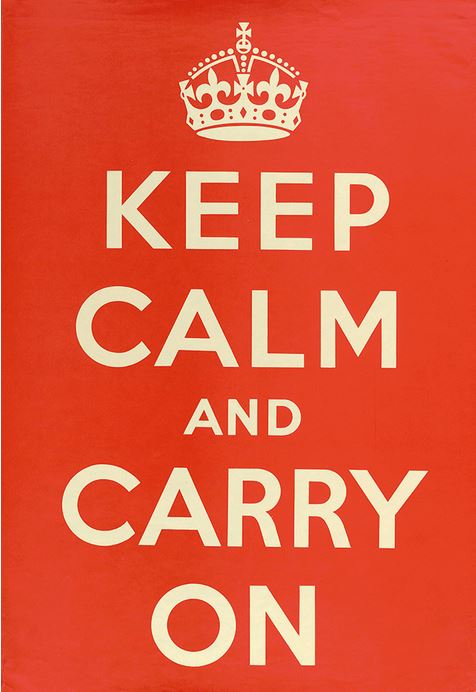 Keep Calm and Carry On.

Wars have been going on as long as there have been humans; tennis not quite so long. However, they have one thing in common. Each is a featured topic in Swann Galleries' auction of Vintage Posters set for August 6. There are other subjects, including different sports and travel and recreation, featured among the 498 posters that are being offered for sale. Still, tennis is the highlight here, as Swann notes “it is the largest single offering of tennis posters ever to come to auction.”

The tennis posters came from an Australian collection, and while many great tennis players came from Down Under, the posters come from all over the world. Swann explains, “Featuring works by the biggest names in design, remarkable ads for famous tournaments by unknown artists, and posters that depict fashionable athletes in their finest tennis gear, the selection offers a wide variety of vintage advertisements, and covers more than a century.” Still, this covers 70 of the 498 lots, so there is much to be found here even if tennis isn't your cup of Fosters.

Here is a poster that could combine tennis and war, though not in an obvious manner. It features a tennis racket, ball, and colorful pennants, celebrating the Concurso Internacional de Navidad (International Christmas Competition), put on by Real Tenis Club Turo. The tournament was scheduled for December 27-31 in Barcelona. What is unusual is the timing, not the days but the year. It was 1939. Europe was on the brink of its biggest war. Germany had already invaded Poland, the Soviet Union had moved into Finland, and England and France had declared war, though they had not actually started to seriously fight. By spring, however, German troops would be in France. Spain, however, while sympathetic to the Axis powers, would manage to stay out of the war, allowing sport to go on, even as it tried to balance its sympathies with its self-interest not to antagonize the Allies, or become involved in the fighting. Lot 212. Estimated price of $700-$1,000.

Sometimes advertisers would use tennis to promote a totally unrelated product. This poster promotes Gulflex Lubrication. This was a service of Gulf Oil's gas stations. They would grease your car. What does this have to do with tennis? Nothing, of course. However, since this was a product of a “service station,” the poster is headed “finest service in town,” and features a picture of a young lady, tennis racket in hand, about to serve the ball. Lot 215. Estimated $600-$900.

Here is something totally different. It is a poster by Andy Warhol. It wasn't intended to be advertising, but Warhol must have done more for Campbell's Soup than most advertisements ever did. Does anyone know whether Warhol liked Campbell's Soup, or did he just draw pictures of the cans? This poster displays 100 cans of Campbell's Soup, stacked ten high in ten rows. This time it is not the iconic tomato soup, but 100 cans of beef noodle. The poster was printed in 1978, and Warhol has signed it at the bottom. Lot 498. Estimated $800-$1,200.

After famously keeping America out of war, Germany's persistent sinking of U.S. merchant ships with its u-boats led President Wilson to seek a declaration of war in 1917. War was declared on April 6. Americans quickly sprang into action. In New York, the Mayor's Committee on National Defense set April 19 as “Wake Up America Day.” A parade was marched through the city while citizens were encouraged to sign up for military service. That day commemorated the Battles of Lexington and Concord, and in particular, Paul Revere's famous ride to warn the local residents of danger. New York decided to recreate that ride in its own way. At midnight, on the Revere ride's 142nd anniversary, a woman dressed as a continental soldier rode horseback through the streets of New York summoning America's men to respond to their nation's call. This poster by James Montgomery Flagg notified the citizens of the planned calling. It is headed Wake Up America Day, and notes the date of April 19, 1917. It shows a woman, looking perhaps like Paulette Revere, with a flag in one hand, a lantern in the other. What young man could resist? Lot 53. Estimated $3,000-$4,000.

This next poster features what has become an extraordinarily popular motto, even if it meant nothing at the time it was created. In the days after Britain entered the Second World War, but before seriously engaging in fighting, the British Ministry of Information began work on posters to rally the people if the situation became worse. Three were created, and copies of the first two were issued, though it hardly seemed like war yet. They were not well received, considered somewhat condescending with their urgent calls for action at a time when it hardly felt like war. Posters for the third motto were also printed up in 1939, but placed in storage. Reportedly, some 2.5 million of these posters were printed. You would think they are very common, even today. However, due to the chilly reception for the other two, it was decided to pulp these posters, all of them, to be recycled for other use. They were destroyed without ever seeing the light of day, their motto unknown to the public. However, a handful of them did survive, and this is one. They were not discovered until the year 2000. It features white lettering on a red background with a royal crown at the top. This is one of the 30” x 20” versions, larger than most. The motto: Keep Calm and Carry On. Lot 93A. Estimated $12,000-$18,000.

Swann Galleries' Vintage Poster auction will be held on Wednnesday, August 6, from 10:30 – 2:30. You can see the posters that will be sold that day at the following link: catalogue.swanngalleries.com/asp/searchresults.asp?st=D&pg=1&sale_no=2356&ps=10