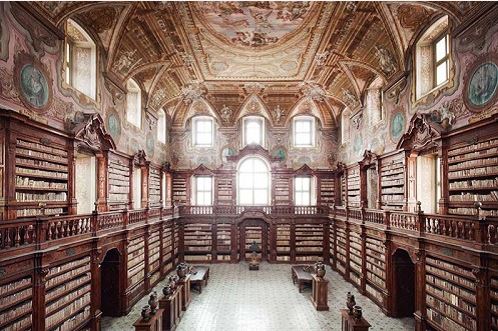 An Italian court has handed down a conviction and five-year prison sentence to the Executive Director of German auction house Zisska & Schauer. Herbert Schauer was convicted of embezzlement in relation to the spectacular theft case from the Girolamini Library in Italy. It is one of the greatest book theft cases ever known. The library's director, Massimo De Caro, pleaded guilty a year ago and received a seven-year sentence. Schauer contested his charges, and a statement from his lawyer indicates he plans a vigorous appeal.

Massimo De Caro will surely go down as one of the greatest book thieves to ever slither across this earth. He was appointed to run the historic Girolamini Library not because of his familiarity with anything related to library science. He had something even better – political connections. He was friendly with a senator from then Premier Silvio Berlusconi's political party. He gave the senator some nice books, though the latter claimed innocence of knowing anything was awry with those he received. De Caro's connections went far and wide, likely taking in a few continents, as thousands of books were moved around the world to accomplices, and eventually unsuspecting customers. There were others involved, including men who could erase library markings, forge material, and other such skills. Even a priest who worked at the Girolamini was implicated (it is a church library). Add to those people the name of Mr. Schauer, who, according to the recent conviction, offered to use the auction house to move stolen books.

As to what all De Caro may have done before he stole an estimated 4,000 books from the Girolamini is open to one's imagination. He was certainly not an innocent suddenly tempted by all of these valuable old books sitting around a seldom used library. Along with some intrigues involving Venezuelan oil and similar shady deals, he was involved with a forgery of a unique Galileo item a few years back, one thought to be worth millions of dollars. Several experts authenticated the forgery the first time around the workmanship was so good.

De Caro was taking books out of the Girolamini Library by the truckload at night. Meanwhile, the library was a mess, books strewn about the place. If the master thief was careless, it was because no one was paying attention. Lower level library assistants were afraid to speak up, and perhaps those with more authority looked the other way. It was not until a rare researcher came in, saw the place in disarray, and wrote about what he found in a newspaper article, that investigations began, and revealed activities too brazen to be believed.

As for the case against Mr. Schauer, the claim stated that two associates of Mr. De Caro delivered numerous volumes to him to be auctioned in 2012. The prosecution stated that he knew very well from where they had come, a charge Mr. Schauer denied. However, after the auction house was informed that some of these books, supposedly from a Swiss collector, might have come from the Girolamini Library, the entire sale was canceled. Still, that cancellation did not relieve Mr. Schauer of claims of receiving stolen property.

On August 2 of 2013, Herbert Schauer was arrested and taken from his home by German authorities on behalf of prosecutors in Italy. He was taken to Italy and jailed there pending trial. Left without its leader, the auction house appointed Wolfgang Lacher to take over the role of managing director. The house then issued a blistering attack on authorities for arresting Mr. Schauer. It stated, “We are deeply shocked. All those who have worked with Mr. Schauer day in, day out over many years know that the accusations raised against him are preposterous, absurd and totally groundless.”

However, the auction house that bears Mr. Schauer's name has since pulled back drastically from its unqualified defense of its leader. In a posting on the Zisska and Shauer website attributed to Mr. Lacher, the firm says that a search of their records after Mr. Schauer's arrest led them to “multiple contradictions and inexplicable proceedings.” It says, “With the internment of Mr. Schauer our company naturally had to reposition itself. In this context balancing and inventories in all areas had to be carried out. Quite soon, to our astonishment, we discovered multiple contradictions and inexplicable proceedings. After some time it was indispensable to request external professional assistance. At the end the investigation resulted in the justified suspicion that Mr. Schauer during many years had committed severe embezzlements to the disadvantage of third parties and also our house.” While not clear, it sounds like some of these issues may be unrelated to the Girolamini case.

The statement goes on to say that they “took quite some time in pondering whether to file charges or whether an internal solution would still be acceptable and finally decided to seek an internal settlement taking into account all wronged parties.” However, it added, “It depends now on Mr. Schauer’s willingness of cooperation whether furthermore a criminal complaint can ultimately not be avoided.”

It should be noted that while Mr. Schauer was found guilty of embezzlement, he was acquitted of conspiracy. Evidently the court did not feel he was engaged in the theft of the books, though it concluded he was, in effect, “fencing” the books on behalf of Mr. De Caro. Mr. Schauer has been separated from his relationship with the firm that bears his name. He was recently released from prison as part of his appeal.