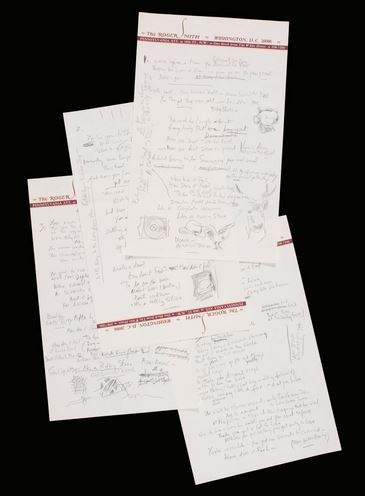 Bob Dylan's manuscript of Like A Rolling Stone (courtesy of Sotheby's).

Old books regularly show up in the news. Something old, something new. A few such stories caught my eye this past month.

The first story involves the all too common subject of book theft. Usually, these cases involve a “customer” at a bookstore, or a “researcher” in a library. This one is a different level of violation of trust. It came from a friend.

The alleged thief is a next door neighbor of Bethesda, Maryland, bookseller Julia Jordan. The bookseller kept some valuable books in her home. She and Christina Wimmel, the alleged thief, became friendly. The latter would visit her home, and the trust was evidently sufficient for Ms. Wimmel to be able to move about the house without being watched.

Ms. Jordan was not aware that some of her books were missing until she heard from a fellow bookseller who had purchased two titles on eBay. The books seemed very similar to two he knew Ms. Jordan owned. That was when she realized her books were missing. That led to a check of eBay records related to the seller, which in turn showed that she had sold several more books that belonged to Ms. Jordan. The next step was a search warrant for Wimmel's home, which revealed another Jordan book in a closet, and shipping receipts for others. Finally, the trail led to another bookseller who had purchased some books from Ms. Wimmel. According to the website of television station WJLA, the dealer purchased 7 books “worth an estimated $4,275” for $300. Apparently, items were sold on eBay for a similar ten cents on the dollar. Some have been recovered, but it appears that many may not be.

Next up we have a new book about some old books, or old maps to be more precise. This too involves theft, but on a much grander scale. The book is The Map Thief, by Michael Blanding. It is the story of E. Forbes Smiley III, the map dealer who undoubtedly wishes people would just forget about him. Smiley was a Cape Cod map seller whose expenses outpaced his income, and turned to the worst way of reducing his merchandise cost. He visited various important libraries, X-acto knife neatly tucked away, and excised many extremely valuable maps from their books. One day while “visiting” Yale University's Beinecke Library, he dropped one of the blades by his feet. There were already some concerns about his behavior. Smiley was later followed out the door, his belongings searched, and his life of crime was over. During that career, he had stolen some $3 million worth of maps, maybe more. He was later convicted and sentenced to 3 ½ years in prison (he has since been released).

Nothing defined a generation more than rock and roll. The music was the subject of a recent auction at Sotheby's that took in over $4 million. The top price, over half of the total proceeds, was bid for the autograph manuscript of Bob Dylan's Like A Rolling Stone. Not all consider it his best song. Runner up in this auction was the manuscript for A Hard Rain's A-Gonna Fall, which will have its share of takers as a favorite, but it only brought a quarter of the price. Rolling Stone was Dylan's first and biggest pop hit, and the one that turned him from a niche folk musician to a rock superstar. Rolling Stone took in $2,045,000, Hard Rain $485,000. This one has nothing to do with books and paper, but out of curiosity, Elvis' peacock jumpsuit took in a cool $245,000.

This final story comes from Vietnam, a land whose name can bring back all sorts of dark memories to Americans and French. This time roles have been reversed. Vietnamese researcher Ho Tan Phan is selling two books written by journalist Bernard B. Fall in the 1960's, Street Without Joy, and its French edition, La Rue Sans Joie. The English edition has been inscribed by Fall to a Major Gillig. The book concerns the First Indo-Chinese War, when the French unsuccessfully attempted to quell the rebellion in their Vietnamese colony. A decade later, it would be the Americans who made the mistake of becoming bogged down, finally achieving the same result as the French so many years and lives later. Fall recognized the mistakes of the French, and though being supportive of the American mission early on, quickly realized they did not understand the land and its people either and the outcome would end the same. Fall died in Vietnam in 1967 when the Jeep in which he was riding struck a mine.

Phan is auctioning his two books and has set a starting price of $380 for the English edition, $230 for the French one. Interestingly, he plans to use the proceeds to support Vietnamese fishermen exercising their claimed rights to the Paracel Islands and surrounding seas. The enemy this time is not the French or the Americans, but Vietnam's ally in those earlier wars – China. What comes around goes around.