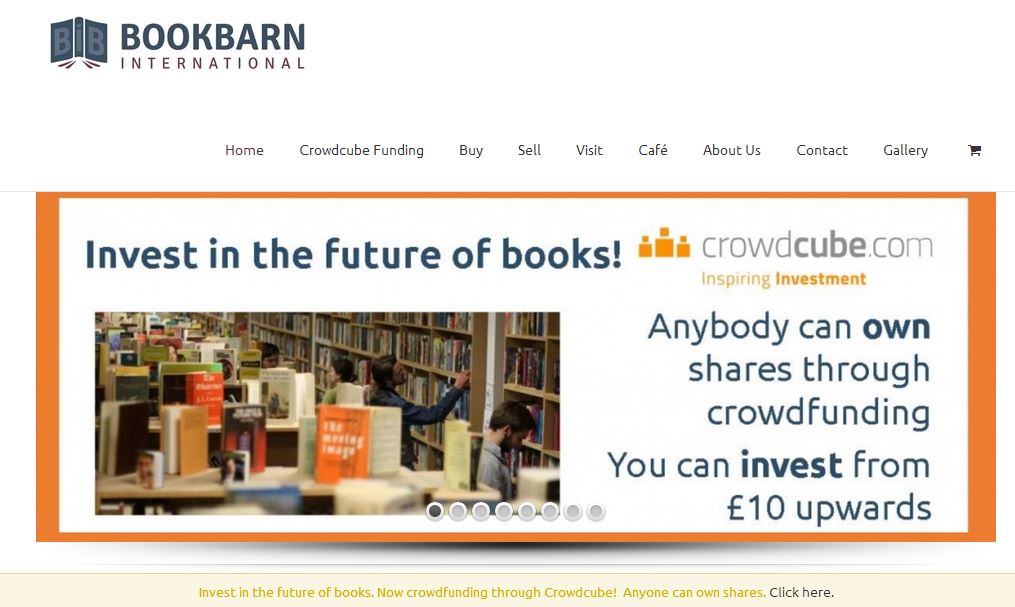 Turning to the public markets for funding of businesses in the selling of old books seems to be gaining some steam, at least in England. In May, Scholium Group, whose main business is Shapero Rare Books, went public with an offering on the London Stock Exchange. This past month, it was Somerset bookseller Bookbarn International that made the move. However, the Bookbarn offering is nothing like that of Scholium. Their offering is less than 1% the size of Scholium's, and their shares will not be listed on the London Stock Exchange, nor anywhere else.

Bookbarn has elected to raise funds through a website called “Crowdcube.” It provides a public forum where anyone can invest in a company, but the investments are more akin to venture capital than stock market investing. I'm not sure such a program would even be legal in the United States, with its various reporting regulations designed to protect investors buying in the open market. What Crowdcube provides is a way for small-time investors, and I do mean small-time, to invest in small businesses. Investments can be as low as £10 (about $17 in U.S. currency). Good luck finding a venture capitalist interested in making a $17 investment. Of course, you could go public and offer shares on a stock exchange for less than $17 each, as did Scholium, but the cost of registration statements and everything else needed for a market offering is more than the total amount Bookbarn will raise.

The way Crowdcube works is you go to their page for Bookbarn, and it allows you to make an investment of any size starting at £10. As of June 30, they had so far raised £34,550 from 57 investors, the largest single investment being £5,000. Bookbarn's target is £75,000, with the Crowdcube rules providing that the investments will be returned if the goal is not met. In return for the £75,000, Bookbarn is offering investors 6% of the company. In other words, they have valued the company at £1,250,000 (roughly US $1.7 million). In comparison, the Scholium offering was for £8 million (for roughly 60% of the company), giving it a value of £13.2 million, or about US $21.9 million, at the time of the offering.

A public offering of this type does not provide the level of protection of one on a public stock market. There is not the level of regulation and information that must be given potential buyers on a stock exchange. This is more of a flyer for small investors to take a minor interest in start up or other small companies. Additionally, an investor's share of such a company is illiquid. Crowdcube allows buyers to sell to other Crowdcube buyers, but this is not like a public stock exchange where there are shares being bought and sold everyday. You may have a hard time selling your share if you want your money back. This type of investment is really more appropriate for someone who likes a particular company, wants to be a part owner, and thinks maybe it will one day be a big success and provide a good return. One should not invest through a platform like Crowdcube if the security of your investment is a high priority. The risk level is very high.

In its press release, Bookbarn's owners said they believe Bookbarn “is the largest seller of antiquarian, rare and collectable books in the world,” which seems a stretch. They say they have 30 full and part-time staff and a 38,000 square foot warehouse. They sell on “19 different e-commerce platforms around the world, including a major government-owned distributor in China.”

The Crowdcube offering can be found at the following link:  www.crowdcube.com/investment/bookbarn-international-15675. We make no recommendation of this offering and advise anyone considering an investment to read the risk warning carefully.