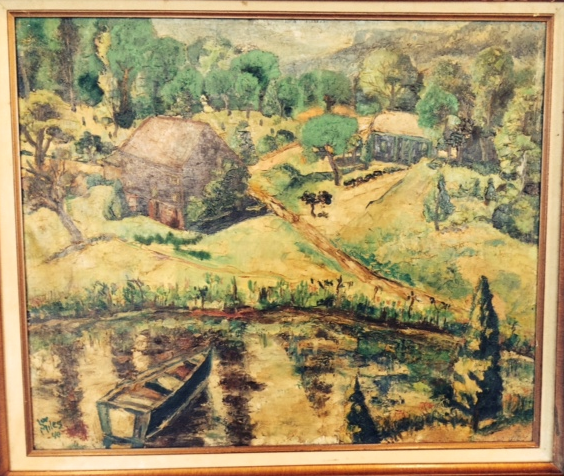 On eBay recently I bought a painting of the Shawangunk Mountains in Ulster County, New York.  The distant scene is the Gardiner cliffs, the collision of an ancient fault of granite that formed the Trapps.  The date of the painting by Lou Miles is 1940 and labeled on the back New Paltz.

The image of the Shawangunk cliffs is enduring, outlooks on many local Mohonk trails that wend south from the Mohonk Mountain House just west of New Paltz presenting unforgettable vistas.

Mr. Miles’ perspective is from the Wallkill River valley looking west, probably from Gardiner near the southern boundry of New Paltz.  For him, the Trapps are south and to the west.  In this painting the Trapps are visible in the immediate distance.

The Trapps, before paved highways and the blasting that created the famous hairpin turn on New York route 44-55 in the 1930s, was the only way through the Shawangunks for many miles north or south.

In this natural, rock strewn cut that connected Poughkeepsie and New Paltz on the east and Kerhonkson, Napanock and Ellenville on the west a community formed.  Ever spare, its few settlers managed a church and a school and seemed much relieved when better roads and motorized vehicles connected them to nearby communities.  By the 1950s the area was mostly deserted.

In the fifty years since I lived in this area New York State and the preservation minded have parcel by parcel acquired tens of thousands of acres that ensure this section is reclaimed by the boney granite and scrub growth that only ever briefly released their certain grip.

An alternative route of horse and carriage roads ran along the spine of the Shawangunks from Lake Mohonk to Minnewaska, on to Lake Awosting to Sam’s Point.  The roads were better but from the 1870s on private, the domain of the Smileys that controlled most of the ridge from Tillson to Gardner and even today control much of the northern ridge.

In collecting material about an area or a place paintings play an important role.