Of Goupils and Men, or the Bestial Condition of Man 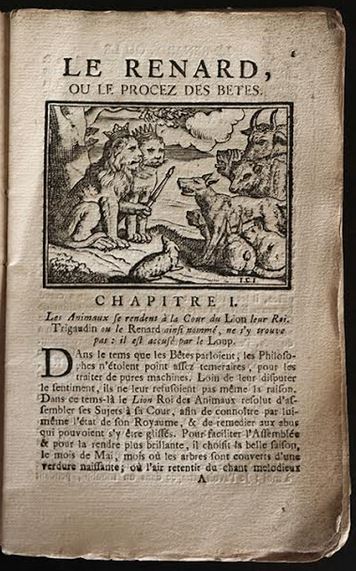 The Lion King (and Queen) address their beastly subjects.

A question was recently raised in a rare books group on a social network: are fables featuring animals for kids? Yes, they are—but of course, not only. I’m French and, as such, a kid of Jean de La Fontaine—his adaptations of Aesop’s fables have become a part of our DNA. Kids love fables with animals because they are a beautiful way to say horrible things, and they enable them to catch a glimpse of the world of the grown-ups—they are initiatory readings. This reminded me of a peculiar book of mine entitled Le Renard, ou Le Procès des Bêtes (Reynard the Fox (1)) and published in 1743 in Amsterdam—quite a disturbing reading. It’s a sort of German Roman de Renard (2) featuring the dreadful Trigaudin, a cunning fox who cuts off the ears and takes out the eyes of his enemies, devours their offspring, tricks them and leads them to death. Trigaudin is a vicious creature who never pays for his crimes; on the contrary, he is eventually appointed to the highest position of the kingdom—a bloody and immoral tale, in fact. For kids? Well—they usually enjoy it. These animals tell them about the violence of the outside world, and they instinctively understand the value of such a teaching.

Trigaudin is what French people used to call a goupil—a fox; but the goupil featured in Le Roman de Renard became so famous during the Middle Age that he eventually gave his name, Renard, to his entire race. Le Procès des Bêtes is illustrated with twenty engravings. The first one shows a crowned lion holding a sceptre in front of an assembly of various animals. Among them is Glutton the Wolf (called Isegrim in many English editions, the name derives from Le Roman de Renard), who complains to His Majesty about the behaviour of Trigaudin, the only subject who dared not come to the royal assembly. Trigaudin, reports the Wolf, pretending to clean the face of his offspring, viciously blinded them with his claws! Then Gozille the Cock (a.k.a Chanticleer) shows the beheaded body of his daughter—“Out of fifteen children,” explains the wretched fowl, “Trigaudin has only left four alive!” Trigaudin came to Gozille a few weeks ago to tell him he had decided to stop chasing his offspring and that he was going on a long journey: “Take care of yourself, and don’t you crow too early in the morning and catch a cold.” The gullible fowl believed him, and the fox caught him off-guard. Moral of this chapter: “Never trust your enemy, no matter the reason why he comes to you.”

Despite the short morals that end up each chapter, Le Procès des Bêtes is a suspicious book that seems to teach our kids that malice always triumphs—indeed, there’s no satirical dimension to this popular text, as shown by William J. Thoms in his impressive introduction to the 1844 edition of the fable (London). Several royal messengers are sent to Trigaudin in his remote castle, whom he murders or mutilates until he is brought to Court and sentenced to death. With the rope around his neck, Trigaudin suddenly shouts at the Queen, to tell her about a wonderful treasure hidden somewhere. “He was taken off the gallows at once, so he could privately talk to the King and the Queen,” reads the book. Of course, Trigaudin is sent for the so-called treasure with some royal subjects... whom he tricks and murders. After another series of evil deeds, our cunning fox has no choice but to face his infuriated King again. Glutton the Wolf then challenges him to a duel; in the Middle Age, it was a common way to settle feuds, as God would never allow a guilty man to triumph over an innocent. Just like the Judgement of God that consisted in plunging the hand of a suspicious man into boiling water—if innocent, God would cure his wound within three days’ time; else, he was put to death. Trigaudin is less strong than his opponent, but more intelligent—and he eventually wins the fight. As soon as he victoriously comes out of the arena, all his former enemies rush to congratulate him. Moral of this chapter: “You are always wooed when elevated over the multitude, whether by merit or malice. Each and every one tries to get close to those Fortune favours. But adversity keeps even your friends away.”

(1): In his Manuel du Libraire (Paris, 1814), Jacques-Charles Brunet gives a short insight of the English editions of this book, starting with The Hystorye of Reynart the Foxe... (M.CCCC.LXXXJ.). “This is one of the rarest editions from the press of Caxton. The history of the Regnard has since been several times printed, but with considerable changes. I’ve seen the following copy: The most delectable history of Reynard the Fox...(London, 1684).” He then evokes the editions of 1667, 1681 and 1733.