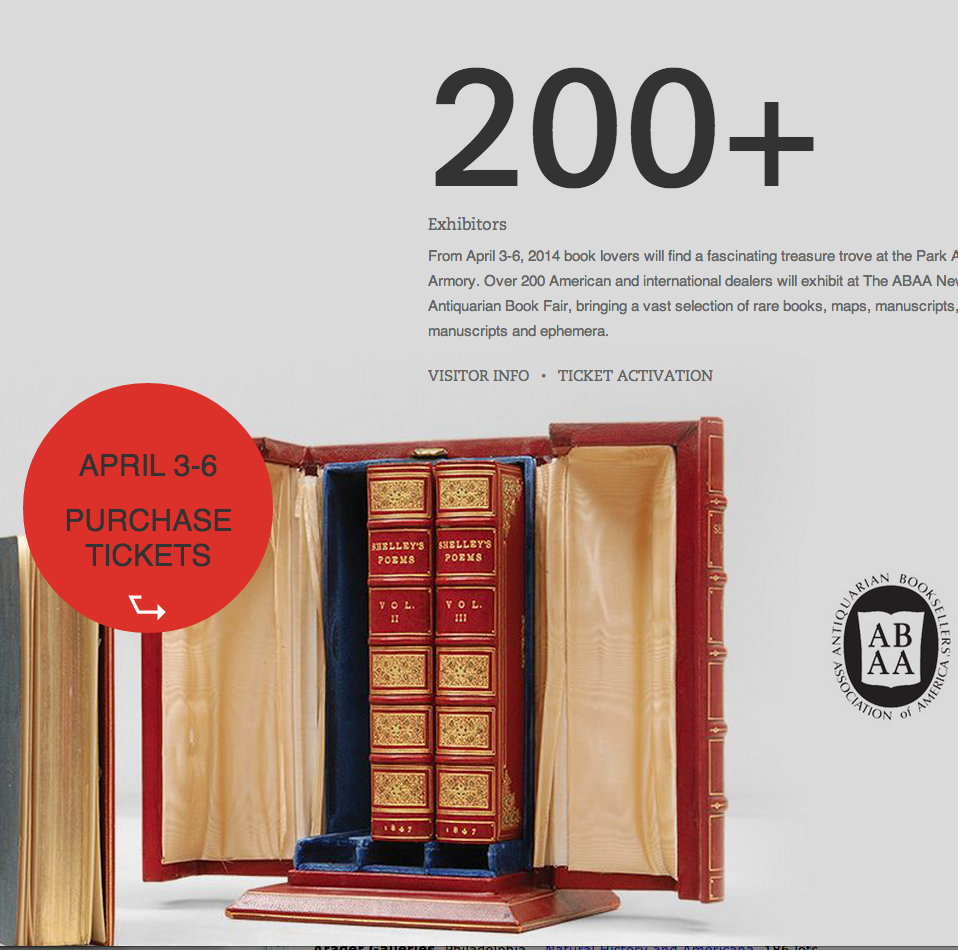 In a few days the gates will swing open and advocates and adherents of the rare book trade will hurry up the steps of the Park Avenue Armory at 67th and Park in New York.  Their pace will quicken as they enter, those with coats and briefcases turning to the right to swap their possessions for a claim check.  Those prepared to enter the great hall will sweep to the left to join the queue of mostly men, well dressed, most on their phones, a few exchanging notes, the majority hoping to buy, a few hoping to sell.  The fair will open shortly.

Inside the hall more than 200 book dealers are pregnant with excitement.  Their passages to this hall have been paid by years of work.  Those who have come from overseas have often attended serious colleges, apprenticed for years with top flight dealers, gone off to start their own businesses and in time earned the admiration and respect of members of their national book seller’s association sufficient to earn them an invitation to join.  Once a member they went on to join ILAB and it is that membership that has made them eligible to participate in this New York fair.

On the American side the national association for the trade is the Antiquarian Book Seller’s Association.  Here too the path to membership is long and membership in the ABAA never certain until it achieved.  The association is the corral that pretends to control its cats and on most days does this surprisingly well.  These American booksellers are individuals and never entirely move beyond their impulse for food fights.

In the year leading to this fair material has been identified, researched, photographed and catalogued.  A typical dealer may bring three hundred items.  Most will be meticulously understood but have gone through a final vetting the day before the doors officially open when other dealers may acquire at the standard trade discount anything their instincts tell them is undervalued and presumably for which they have a client.  Dealers who misprice will see their stock flee to other booths even before the opening bell rings.  Of course if they price high they’ll have all their stock on hand when the show opens and possibly, if they have seriously misjudged the market, still have it at the end.

And for most that’s a serious problem.  Go back 30 years ago and most dealers had shops.  Today perhaps 15% do.  Many issued catalogues and few do today.  Most had committed clients they could rely on.  Over the past 20 years, as shops closed, listing sites emerged for the general book trade as their most consistent way to sell – up to a point.   That point is price.  When the material is expensive discussion and negotiation are often essential ingredients in the final agreement and this fair and others are increasingly the place where such discussions begin.  This has made the great trade fairs even more important than they traditionally were because it is here that buyers with five, six and even seven figure budgets identify material, and then sit to discuss the fine points and the price.

The shows are that important.

As the clock is winding toward 3:00 pm there is restlessness in the crowd.  If past years are any guide a hundred or more are here and ready to stream in, some to browse randomly, others to walk directly to a dealer marked on the show map.

Behind the closed doors Donald Heald, who has presided over the New York Show Committee for many years and has his booth near to the entrance, has been walking about confirming that all appears in good order.  With a few minutes to go handshakes are exchanged and best wishes extended.  On the one side more than 10,000 years of dealer experience is waiting.  On the other the first wave of what will be more than a billion dollars of buying power begins to move.  The clock has struck 3:00.  Ticket takers and credential checkers are on the ready.  Then from just beyond the curtain a clear voice can be heard, “the show is open.”

Links to the ABAA Fair