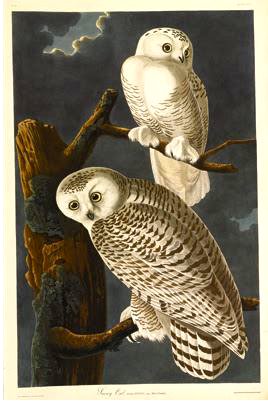 The snowy owls are one of Audubon's most striking images.

On April 1, there will be an auction at Sotheby's in New York for a copy of what was, for years, the most expensive printed book ever sold at auction. Offered is a rare first edition, double elephant folio copy of John James Audubon's Birds of America. This title broke the record for a printed book at auction in 2000 when Christie's sold a copy for $8.8 million. In 2010, the book upped its own record when Sotheby's sold a copy for £7.32 million, or about $11.4 million in U.S. currency. Copies also sold for $5.6 million in 2005 and $7.9 million in 2012. Four copies sold for over $1 million prior to 2000.

Birds of America finally lost its distinction as the highest priced printed book ever at auction last November when a copy of the Bay Psalm Book sold for $14.16 million. This copy is not likely to regain the honor for Birds. It is not in as strong a condition as the Lord Hesketh copy sold in 2010. Nonetheless, the only question is how many millions of dollars it will bring.

In some ways, Birds of America is the anti-Bay Psalm. The latter is a very ordinary-looking book of pure text, psalms printed many times before. Its value emanates from its chronological standing. It was the first book printed in America. Additionally, only about a dozen copies are known to still exist. Birds of America was not a first book about American birds, and it is far more common, some 120 copies of the first edition known to be held in collections. What makes this book so spectacularly valuable is its beauty, the hand-colored magnificent drawings by Audubon in this massively sized book.

Birds of America was not published at once, but rather, the sheets were published annually and sent out to subscribers. It took many years – the first pages released in 1827, the final ones not until 1838. Because it was so expensive to publish, not many people could afford to buy it. It is estimated that 175-200 copies were printed. It was not profitable for Audubon. It was not until he published a smaller, cheaper edition a few years later that he finally generated the sales necessary to make a good income.

The copy to be sold currently is owned by the Indiana Historical Society. Someone at the Society made an extraordinarily shrewd move back in 1933 when they purchased this set for $4,000. That was a lot of money during the Depression, but time has shown that the best, most valuable books have proven to be the best investments. The typical book is valued today at 54 times what it was in 1933. That would peg a $4,000 book at $216,000 today. Birds is likely to sell for 15 or more times that amount.

The drawback to this copy is condition. We have not seen it so we cannot evaluate the copy. The Indiana Historical Society purchased it from a public library so it did see a fair amount of use when it was younger. The most expensive copies have been ones that were privately held throughout their lives by people who treated them with great care. The Indiana Historical Society has placed an estimate of $3 million on their copy, while describing their estimate as “conservative” and as a “minimum.” Sotheby's had not placed an estimate on it as of this writing, but their estimate will be more telling as they have far more experience in this than does the Historical Society. We will not be surprised if it is higher.

There will also be a second Audubon first edition owned by the Indiana Historical Society placed up for sale in this auction. They will be selling Audubon's one other book, his follow up, so to speak – Viviparous Quadrupeds of North America. This one is generally just referred to as Quadrupeds as not everyone knows the meaning of “viviparous” (it refers to animals giving live birth, rather than laying eggs, primarily mammals). The second half of this book had to be completed by Audubon's son and his text-writing partner as ill health and memory issues plagued the great artist-ornithologist in his later years. The Society purchased this one in 1951 for $900 and has estimated it at $300,000.

One thing this copy of Birds has in common with the recent Bay Psalm is the reason for the sale. While a psalm book on its face was a logical possession for the Old South Church in Boston, the reality is that it was so valuable it had to be kept locked up in a safe somewhere off premises where no one could see it. The Church has many other financial needs, from its physical structure to outreach missions to the needy, while the book filled no particular need. The same applies to the Indiana Historical Society's relationship with its copies of Birds and Quadrupeds. CEO John Herbst explained, “while these sets are rare and valuable, they were acquired when the Indiana Historical Society’s mission was broader, more eclectic and not as focused on Indiana-related history as it is today.” Today, the Society is focused on Indiana items, and funds obtained will be used to add to those collections and add enough archival storage space to meet its needs for the next 30 years. “We continually see Indiana-specific items on the market that we’d like to have, but for which we need additional archive space and acquisition funds,” Mr. Herbst added. “This decision by our Collections Committee and Board helps us focus more and better preserve what we have, as well as acquire additional Indiana-related material.”

The sale will be held on Tuesday, April 1, at Sotheby's in New York. The sets will be available for viewing at Sotheby's Galleries the preceding six days, March 26-31.