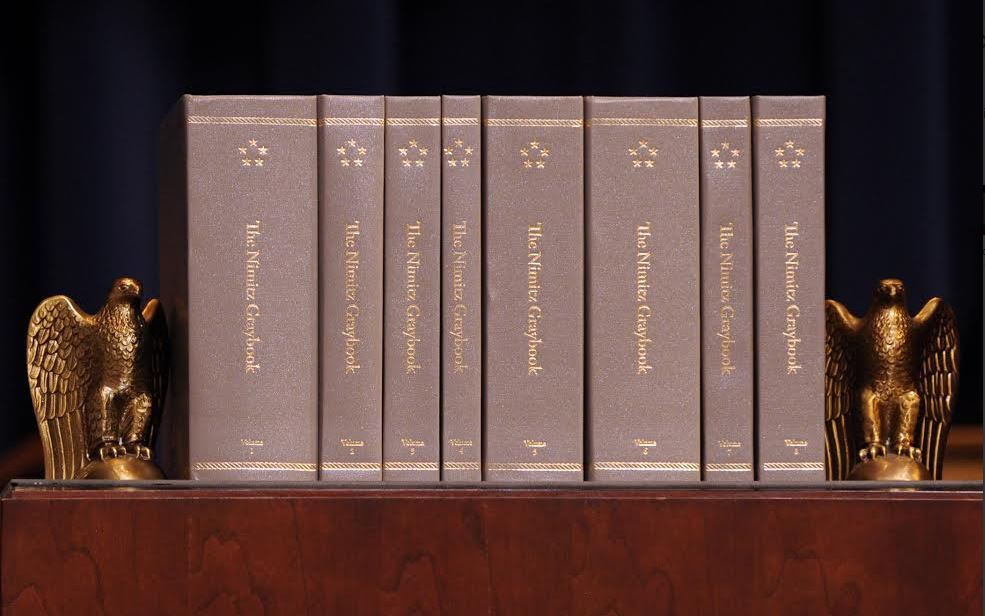 A digitized version of the wartime diary of Fleet Adm. Chester Nimitz went online Feb. 24. The event coincided with Nimitz’s 129th birthday and included a live stream of the occasion. The U.S. Naval War College in Newport, RI hosted the celebration which featured a variety of speakers and made available all 4,000 pages of his detailed operational diary covering activities and correspondence of the Pacific Command from Dec. 7, 1941 to Aug. 31, 1945.

Referred to as the Nimitz “Gray Book,” the eight-volume, large bound book is a running command summary originally bound in a gray covered material that gave the collection its nickname. It is now available for the first time as a high-quality, searchable document within the NWC library’s online Naval Historical Collection, which was also rolled out. (See link at end of text).

The document, which remained classified until 1972, includes the daily record of the combat situation that the commander in chief, Pacific, and Pacific Ocean Areas, faced every day during World War II. It shows what Nimitz knew and the reasons behind his daily command decisions. Staff-member Capt. James Steele began it on the day Pearl Harbor was attacked and ended it on Aug. 31, 1945, just two days before the formal end of the war.

"I've seen the collection and it's really a national treasure," said Capt. Henry Hendrix, Ph.D., director of the Naval History and Heritage Command (NHHC). "They clearly reveal what Nimitz thought was important, which gives the reader a great deal of insight into how his experiences both operationally and at the Naval War College informed and influenced his prosecution of the war. I'm extremely pleased we can now share it with researchers, the American public, and sailors past and present. I'm eager to see the collection discussed and to demonstrate the continued relevance of leveraging history in the decision making.”

Nimitz was assigned to relieve Adm. Husband Kimmel, and arrived in Pearl Harbor on Christmas Day, 1941. Nearly three years later, he was advanced to the newly created rank of Fleet Admiral - five stars. Less than a year later, Sept. 2, 1945, he signed the instrument of the Japanese surrender aboard the battleship USS Missouri in Tokyo Bay.

"You're getting the whole picture, from the South Pacific to the Aleutians, and picking up on the progress of the war," said Robert Cressman, a NHHC historian. "I think it's immensely valuable for people to see how it was done," said Cressman. "You're getting a fly-on-the-wall approach to how decisions were made and how the war was fought.

Including records from individual ships, readers can see how each piece fit into the larger whole - while the war was raging around them. The physical collection consists of 4,030 single-sided pages filling 28 bankers boxes held at the Operational Archives at the Washington Navy Yard in Washington, D.C.

The size and complexity of the document reflects the magnitude of the job Nimitz undertook commanding the Pacific fleet controlling the expanse of the Pacific Theater, which now comprises more than 100 million square miles and more than half the earth's surface.

It is "the most authoritative source on the Pacific War available anywhere," said Naval War College historian Douglas Smith. "Making the document public allows for a better understanding and context of the unique value and consequence of the U.S. Navy, and Nimitz's approach in directing the Pacific campaign."

Its pages fragile after decades of storage, the collection (as a book) would largely be inaccessible. The digitization, conducted gingerly, makes the holding available worldwide to researchers, naval history enthusiasts, and others interested in their naval heritage.

The NHHC in Washington, D.C., which maintains custodianship of the volumes, agreed in 2012 to participate in the digitization project. The project was made possible through the support of the Naval War College Foundation and the Naval Order of the United States.