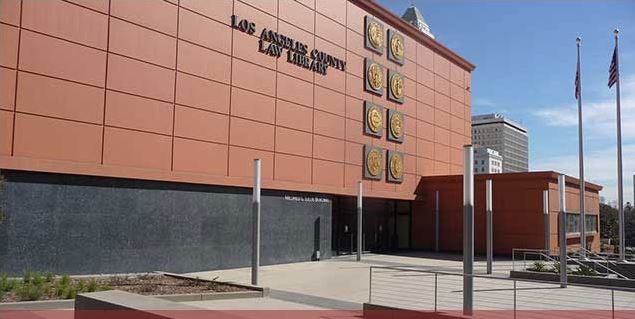 Some libraries are more like collections than working libraries. Others are designed to provide material for historical research. However, most are intended for practical use by today's users. As such, it means older material no longer regularly used by patrons needs to be removed to make room for newer, more relevant books. Such is the case at the Los Angeles County Law Library, and it is making for a rare opportunity for collectors to purchase some very old and historical European legal tracts. There is even a second edition of Newton's Principia available, not exactly a legal text but an extremely important scientific work. The books will be sold by Bonham's in England in two sales, one in March, the other in April.

The LA Law Library was formed in 1891 to provide access to legal information both for those in the legal community and for the general public. One hundred twenty years later, that purpose remains unchanged. It is there to serve those for whom fortune, or misfortune, demands they weave their way through the labyrinth of the law. Books that were useful in the library's earlier days have been superseded by a century's worth of changes in the law. One still may quote Blackstone once in awhile, but the need for a treatise on 15th century cannon law, especially in Latin, is unlikely to arise in Los Angeles very often. The library can no longer justify the shelf space, nor the cost of maintaining an aged book from deterioration, considering its purpose.

Among the books offered is the aforementioned 1713 edition of Newton's Philosophiae naturalis principia mathematica. It was the second of three editions published during Newton's lifetime. His account of the laws of motion is universally regarded as one of the most important, if not the most important, scientific work ever published. The first edition had long ago sold out and become scarce when Newton was persuaded to issue this second, and updated edition of his work. The price is estimated at $13,000-$20,000.

Other items offered include a beautifully illustrated 16th century edition of Justinian's Corpus juris civilis. Institutiones, estimated at $8,000-$12,000. There is a late 15th century copy of Johannes Andreae's Super arboribus consanguinitatis, affinitatis et cognationis spiritualis necnon legalis, a notable item of canon law estimated at $6,500-$10,000. An important 16th century English translation of the Magna Carta from the original Latin by George Ferrers is estimated at $5,000-$7,000.

The LA Law Library, the second largest public law library in the United States after the Law Library of Congress, acquired most of this material from the 1940's through the 1960's as part of larger acquisitions. However, time has shown insufficient demand for issues such as older Latvian Law, Tuscan criminal penalties, and homicide in Salamanca to hold onto these books any longer. The library's Executive Director, Sandra Levin, explains, “The collection of historic European law books, although interesting academically, does not meet the practical contemporary needs of the Library’s users whose focus is overwhelmingly on relevant, useful practice materials. Their sale will free up space to conserve the rare books and documents on American law which are much more relevant to our users.”

Bonham's will be auctioning the material in two sales in England, one in London on March 5, and the other in Oxford on April 29. However, American buyers will have an opportunity to view highlights of the sale at Bonham's Los Angeles galleries from February 7-9, timed to coincide with the 47th annual California International Antiquarian Book Fair in nearby Pasadena.