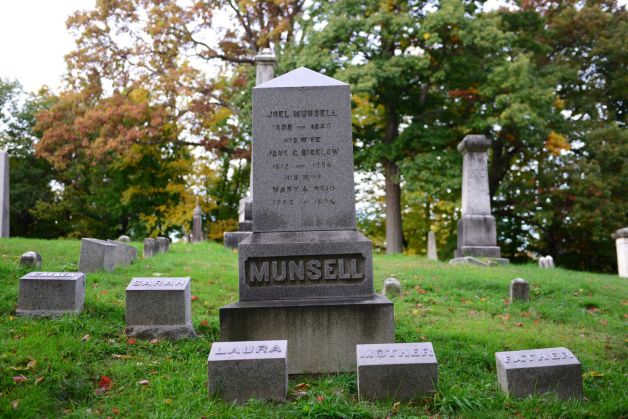 Joel Munsell was a respected and prosperous publisher of newspapers and books. His grave is in Lot 47, Section 4, just up the hill from the cemetery's office on South Ridge Road. (Will Waldron/Times Union)

On a grassy knoll in Albany, New York Joel Munsell rests as he has since 1880 when his printer’s heart ran out of ink.  Mr. Munsell was a local printer who left an outsized mark that was once visible, slipped from view, and has since slowly reemerged.  Mr. Munsell’s printing exploits were both prodigious and modest.  Those authors with the best books and those fussy about printing quality took their manuscripts to Van Benthuysen Steam Printers to turn them into printed works.  Mr. Munsell’s strength was in the works of modest circumstances where a few hundred copies would be enough to say, “it’s in print.”

He printed almost everything that could be printed and himself sent his best material to other printers when the requirements were more delicate and the client expectations higher.

I’m remembering Mr. Munsell again this year, reminded of him and his contributions by a story and photo in the Albany Times Union on December 5th.  It is nice to see he is remembered.

His lasting achievement was one of his shortest print runs, a bibliography of his printings, Bibliotheca Munselliana, in 1871 that sought to list by year all printings issuing from his presses during the years 1834 to spring of 1871.  It is an impressive, if somewhat defective, list providing information on 2,268 press runs, five hundred of which show up from time to time.  The rest fall somewhere between never happened and no one cares or possibly are so mis-described as to be unrecognizable.  Certainly many carried someone else’s indicia or no indicia at all.  It’s a shame because Mr. Munsell left us with the makings of a great book collector’s parlor game:  where are these missing titles?

The American Antiquarian Society that has many of Mr. Munsell’s papers lists 243 of his titles.  I have, over the past decade acquired about 450, little of it expensive, a success based mostly on diligence and interest rather than money.  I find his career interesting because, for 990 of the 2,268 entries in his bibliography he listed the quantities printed.  This makes it possible to calculate probabilities of reappearance based on the number of copies printed and their number of reappearances that incidentally mostly occur on listing rather than auction sites because most of his printings are today more eBay-ish than Christie’s or Sotheby’s.

Knowing the quantity is important of course but so too are the forms; pamphlets, books in paper covers, books in hard cover, once in a long while single sheets and occasionally maps.  Survival rates by form vary widely.  Subjects, it turns out, also predict survival.  Murder accounts survive while insurance company balance sheets have not.  Most of what he printed today falls into the broadest and vaguest printing category – ephemera, an area that is becoming better understood but will not be fully mapped for another two decades.

All the variables of his printing allowed for, his production provides clarity on both 19th century printing and survival rates into the current era.   His printer’s bibliography is the unique key, the calculations and estimates determined or deduced from his quantities and their chance reappearances the chance for the biblio-didact to play more chess than checkers.

My own experience with the Munsell material is the basis of one of the most interesting aspects of the Americana Exchange, the ability, for over 400,000 old and collectible printed items to calculate their probabilities of reappearance.  This began with my study of the Munsell material.

So it is refreshing to see that Mr. Munsell is still making the local newspaper, the Times Union in Albany and that, his story went infectious if not viral online.  Mr. Munsell was himself a newspaper man in and out of the business most of his life and I believe he would find it interesting that his work and his accomplishments are still noted in distant circles and written about online.  Were he alive today he would be 205.

His gravestone is made of granite and that’s good thing.  Sand stone surrenders its details to rain, snow and time.  Granite will also lose its battle but not for a thousand years.  In that time, the mystery of his missing printings that never seem to show up will be resolved by some math quant that figures out how to unearth them.

If so, there will be an “aha” moment, among scholars and readers of the Albany Times Union and AE Monthly.  Until then we can wait as Mr. Munsell is waiting:  quietly.