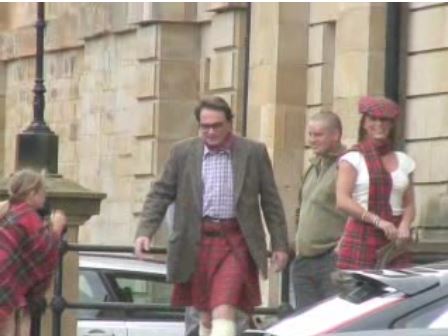 Raymond Scott emerges from courthouse with his assistant, wearing his kilt.

An updated account of the life of eccentric book thief Raymond Scott was recently published. The title is Shakespeare & Love. The Inside Story of the Book Crime That Stunned the World. It is a similar title to a book published by the same author, Mike Kelly, along with Scott himself, a few years back, except this one takes us through Scott's sad death, at his own hands, in 2012. Scott was an unlikely character for a major book theft, and yet he made off with a copy of one of the most important books ever published – a Shakespeare first folio. It turned a small-time shoplifter into a celebrity of sorts, a role Scott relished as long as it lasted, but eventually proved to be his downfall.

Raymond Scott was an obscure resident of Washington, County Tyne and Wear, in England, most of his life. Not too many people knew him other than the local police. Scott had an aversion to real work, though he did appreciate what it brought – money. Fortunately, he had a father who was more devoted to working for money than spending it. Scott's father was an electrical engineer, and though he certainly wasn't wealthy, he did leave Raymond a little money when he died in 2004. He also left his son the role of taking care of his elderly widow, for which England provides a small caregiver's allowance.

Scott had long supplemented his meager income with petty shoplifting. His long resume included pilfering items as small as a bottle of wine and a smoke detector. His record was such that no one suspected him of a major heist at Durham University, a scant ten miles away. In 1998, someone stole their copy of a Shakespeare first folio. The Durham first folio disappeared without a trace, with no sign of what had happened for over a decade.

When Scott inherited a little money from his father, his tastes grew from small-time thief to those of an international playboy. Scott spent his money rapidly. He bought a Ferrari, fine wine, nice clothes, and began to travel. The type of thefts Scott was known for would hardly support a lifestyle like this, and his father's money was insufficient to last very long at this pace. Scott turned to the source most of us do when confronted with such expenses, not crime but credit cards. He managed to run up over $100,000 in credit card debt. Of course, even this source doesn't last forever. Alas, eventually the credit card companies want their money back, and with lots of interest.

By this time, the jet-setting Scott had developed a romantic interest in a beautiful young Cuban dancer. At 21-years-old, Heidi Rios was 30 years Scott's junior. She was able to overlook the difference so long as Scott lavished gifts upon her and appeared to be the wealthy Englishman he was not. In reality, he was an over 50-year-old man, highly in debt, who lived with his mother in her small home.

Scott must have been feeling enormous financial pressure when he walked into the Folger Library in the other Washington – D. C., America, with a copy of the first folio. The Folger Library has by far the most extensive collection of first folios in the world. Scott confidently announced that he was representing a Cuban family which, somehow or other, had come into possession of a first folio. He left the copy at the Folger to be evaluated and valued, Scott undoubtedly concluding the Folger would unobtrusively find him a buyer for his copy if not buy it themselves. If so, he guessed wrong. First folios don't just show up. There are extensive records of where the 232 copies known to exist are kept, and new ones don't appear anymore. Naturally, the Folger searched for any missing copies, and quickly did a comparison with the missing Durham first folio. Although Scott's copy had been defaced in several places to hide its identity, there were enough telltale signs remaining. The Folger recognized that Scott had not come in with a copy that had been lying unknown in Cuba for generations, but the one that had disappeared from Durham University a decade earlier.

While the ending of this story is not hard to guess, the trip to that inevitable conclusion was not so obvious. Scott played the role to all the world he must have played to Ms. Rios in Cuba. He continued to act like an international playboy, his personality as large as his income was not. He would arrive at court appearances in outlandish costumes, or make a dramatic appearance. One time he came in a horse-drawn carriage, a beautiful young “assistant” by his side. Another time he chose a stretch Humvee. He once came in a kilt, to emphasize his heritage and his name, “Scott.” In another court appearance he dressed in military fatigues, pointing to the Cuban connection by looking like an aging Che Guevara. Frequently, he would bring bottles of wine or other fine drink along. He would regale the press with protests of his innocence that were as entertaining as his appearances. There was never an absence of laughs when Raymond Scott arrived.

And then one day it all ended. Scott was convicted. He was never convicted of stealing Durham's first folio. However, he was convicted of possessing stolen goods and taking them out of the country. He was sentenced to eight years in prison. His high living was over. The fun and games had come to an end.

At first, it seemed like Scott was adjusting well to prison life. His history made him somewhat of a celebrity behind bars, and he joked about working in the prison library. However, like everything else in Scott's life, it was a charade. He became deeply depressed, talked about ending it all. Then, on March 14, 2012, he did. At the age of 55, two years into his eight-year sentence, Raymond Scott killed himself.

Author Mike Kelly conducted extensive interviews with Scott, both as he was awaiting trial and in prison after his conviction. Ever the publicity hound, Scott wanted his story told. He even went so far as to admitting to the crime for which he was never convicted to Kelly, at least almost. He told of a lonely man who sees a copy of a valuable book kept not in a vault but on a shelf, someone who loved the book both for what it was and as an asset, and who wanted to live life in full in places like Havana, London and Paris. However, he ended his tale by saying it was just a “fairy story, of course.” Scott's life was a fairy story, though this tale was probably the only true one he ever told. You can find Kelly's account of Scott's life on the usual bookselling websites. In a world of fictional characters, Raymond Scott was a Walter Mitty who actually succeeded, for a time, in living out his fantasies.