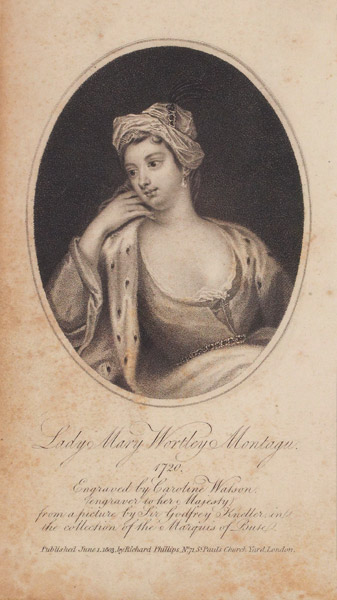 One day, a bookseller from New York tried to convince me to buy one of his books despite some minor defects: “I’ve been in the business for more than thirty years and trust me, the beauty of a book lies in its defects.” I laughed, and then retorted that if that was his conception of life, he surely had had a lot of girlfriends in his life. But just the other day, I remembered our discussion with a strange feeling. I had just bought a book on eBay—God forgive: a copy of the Letters of Lady M—y W—y M—e, a new edition printed in English—and in Paris—, in 1784. A small in-12 volume bound in contemporary calf; a modest binding but a book in a very good condition that didn’t cost me much. At first, I was delighted. It was lovely and the reading was exciting—but I realized it was incomplete. Several pages were missing in two different parts of the book. Only a book lover knows how I felt at this precise moment. Upset, I cursed the bookseller—who had forgotten to mention this detail—for spoiling my joy, and put this horrible book aside with the firm intention to send it back. But later on, a bugging thought came to me. I had noticed that the missing pages had been torn away a long time ago, and this defect just didn’t match with the overall good condition of the book—it became clear to me, my dear Watson, that someone had deliberately taken off these specific pages. And I decided to understand why. Googlebooks soon taught me the unknown tearer hadn’t expressed his or her fury at random, but on two precise letters numbered XXLVI and XLII.

The Lady M—y W—y M—e stands for Lady Mary Wortley Montagu (1689-1762), the famous wife of Mylord Wortley—she followed him to Constantinople when he was appointed Ambassador in 1716. Her letters were written to various persons during her journey, including Alexander Pope with whom she kept falling in and out of friendship with. It was uncommon for a woman to travel so far, but this young lady was quite uncommon. Not only had she character but she was also a very good writer. “If the reader, after perusing one letter only, has no discernment to distinguish that natural elegance, that delicacy of sentiment (...) and lovely simplicity (...) in which these letters exceed (...), let him lay the book down, and leave it to those who have,” wrote the authoritarian Lady M.A who published these letters. “I confess, I am malicious enough to desire,” this lady went on, “that the world should see, to how much better purpose the LADIES travel than their LORDS.” Men, beware: this is a story of proud and militant women who refused to bow to the so-called superiority of men—poor them. And it took place in the early 18th century! The same Lady M.A stated that the reader shouldn’t be prejudice towards the female author: “Rather let us freely own the superiority of this sublime genius, as I do in the sincerity of my soul, pleased that a woman triumphs.” She even exulted in the two letters that upset our unknown tearer.

The first missing letter was written in Adrianople, in 1717, “with some content of mind”—and flesh, I should add. Indeed, while in Sophia, she went incognito to the hot baths (or bagnios), where she found many women, “all being in the state of nature, that is, in plain English, stark naked. Without any beauty or defect concealed.”—guess my New York bookseller would have been comfortable with the whole situation. She was clearly impressed, and maybe a little bit confused, by what she saw, and this is what probably upset our unknown tearer. Naked women showing themselves shamelessly? What an outrage! Furthermore, Lady Montagu’s description is quite sensual. “They walked and moved with the same majestic grace which Milton describes our General Mother with.” This reference to Paradise Lost was quite daring—how could we honestly imagine Eve bathing in some Muslim bagnios? Lady Montagu went further: “Most of their skins shiningly white, only adorned by their beautiful hair, divided into many tresses, hanging on their shoulders, braided either with pearl or ribbon, perfectly representing the figures of the graces.” What a thought-provocative—to say the least—piece of writing! This is a moist, hot, and sensual scene, depicted by another woman who didn’t care about looking at the protagonists in the eyes: “If it were the fashion to go naked, the face would be hardly observed. I perceived that the ladies of the most delicate skins and finest shapes, had the greatest share of my admiration, though their faces were sometimes less beautiful than those of their companions.” Lady Montagu enjoyed her unexpected emotion, and confessed having “wickedness enough” to wish one Mr. Gervais, painter, “could see (so) many fine women naked, in different postures, some in conversation, some working, others drinking coffee or sherbet, and many negligently lying on their cushions, while their slaves (generally pretty girls of seventeen, or eighteen) were employed in braiding their hair in several pretty fancies.” But it would have meant the end of him, as “’tis no less than death for a man to be found in one of these places.” No male traveller could have ever given such an insight into this world, indeed.

Let’s imagine the agitation of the unknown tearer who read those scorching lines—especially the part where the English Lady is finally “forced to open (her) shirt, and show them (her) stays, which satisfied them very well.” But this experience was so exciting for Lady Montagu that the ruins of Justinian’s church she visited afterwards appeared like “little more than a heap of stones.”