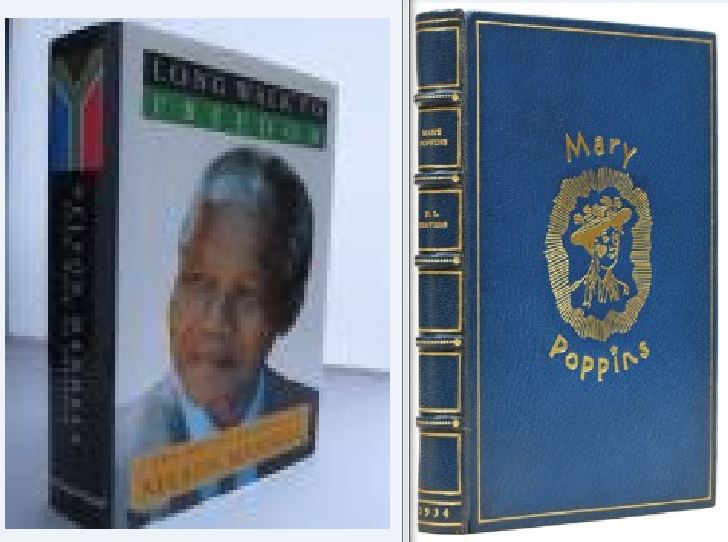 A pair of new movies now in wide theatrical release should bring new attention to books by two authors who are already extremely well known.

The first is “Saving Mr. Banks” a Disney film about the collaboration between author PL Travers and Walt Disney in the making of Mary Poppins.

The second film: “Long Walk to Freedom” chronicles the life and struggle of Nelson Mandela, the man who spent 27 years in prison, was a moving force in ending apartheid and was elected the first Black president of South Africa. This motion picture about Mandela incorporates much of the material from his 1994 autobiographical book of the same name.

Fans of the eccentric English nanny are probably already aware that “Saving Mr. Banks” is a sweetened up account of the long running attempt by Walt Disney to secure the rights to Mary Poppins from author Pamela Lyndon Travers, born Helen Lyndon Goff.

The film, a Disney product, is sweetened up for popular consumption, but even with several heaping spoonfuls of sugar it is clear that Travers was a tough customer who was by turns difficult, irritable, thin-skinned and intensely protective of her character - even as she was much in need of the money.

The 2013 movie starring Emma Thompson as Mrs. Travers and Tom Hanks as Walt recaps their love-hate relationship which resulted in the 1964 film starring Julie Andrews and Dick Van Dyke (which she hated and which made buckets of dough for Disney).

Notwithstanding the author’s dislike of the finished product (the music, the dancing, the animation and all “that chirping”), the 1964 Disney film became much loved family fare with enough spin-off merchandise to keep Poppins’ collectors in memorabilia for several lifetimes.

Disney being Disney there was also a London theatrical production in 2004 followed by a run on the New York stage in 2006.

There was, however, no second or third transitions of Travers work from printed page to screen and her lasting distaste for Disney is evident even in this sweetened up film and well documented by others who knew them both..

To read more about the back story of the long running enmity between Walt and Pamela (or as she continually corrects him: “Mrs. Travers please…”) try the recent piece by Marty Kaplan who was a Disney VP in 1988 and recalled the experience recently in several pieces published on line. Kaplan writes entertainingly on how he tried and failed to secure further rights to other Travers works.

At the time of their encounter she was 87 and “was open to doing a second movie at the studio, and within a few months their agent closed a deal, but she extracted a steep creative price: Unlike every other features deal at the studio, this one gave away control of the story, settings, and characters to the author of the underlying material. To her.” No further films were made of other books.

The first volume of multiple Mary Poppins stories was published in London by Gerald Howe in 1934 and has pretty much stayed in print ever since. For book collectors the newest Disney film is likely to introduce the author and her works to yet another generation of youngsters and their parents and add some interesting - if not altogether authentic - details about how the story came to be and why it lives on.

As for present market values: Recent eBay “Solds” show a US first with dust jacket of the book signed by Julie Andrews who played the film lead going for $800. Also selling recently was Reynal & Hitchcock, 1934 American first edition with a priced dust jacket ($1.50) at $168.50.

The AE database shows a variety of Mary Poppins sales in 2013. A lot consisting of the English first editions of the first three Mary Poppins books plus an American first of Mary Poppins went for GBP 4,000 at Bonhams, dramatically higher than the estimate of GBP 600-800

Likewise at a recent 2013 Skinner auction the 1934 Howe first edition, with the dust jacket, in publisher's bright yellow cloth, with the portrait of Mary stamped on the front board in blue and a price clipped dust jacket, realized $3,900, somewhat above the estimate of $2,000-$3,000.

Wikipedia gives publisher and dates for other titles in the Poppins series as:

Link to Marty Kaplan reminiscence about trying to negotiate a second film with Travers:

With Nelson Mandela we are dealing with a giant of the 20th century, a man of immense stamina, courage, charm and determination. His recent death in December of 2013 focused the eyes of the world on South Africa. Virtually every world leader attended the funeral.

Mandela from the book person’s view is well represented and best known by his 1994 biography “Long Walk to Freedom.”

For this volume there is the true South African first printing, some of which he personally signed on the day of issue in 1994 and there are many good quality American copies of Long Walk both signed and unsigned. Eaton Press also has individual and multiple books in sumptuous bindings all signed and they too have found a ready market.

Collectors of high spots in the world of the book can expect that Mandela is a front-of-the-line historical figure with a substantial following.

A brief list of Mandela books is at the end of the article, but we suggest that ephemera will hold up better. The 1994 Mandela for President poster is a beauty and not so expensive (yet if you have an extra one that’s authentic drop me a line). It is visually appealing and also said to be widely copied without attribution.

There are also many political pamphlets and broad sheets along the way and though Mandela walks with Gandhi and Martin Luther King in the popular imagination, in the ideological sense he gave up non-violence early on and was wanted early on for incendiary activities with a hard left tilt.

In the book world what’s floating around right now seems to be quite a few of the pamphlets and other ephemeral materials. Those, as well as photo documentation, are predicted to become increasingly desirable.

Some of the most interesting material passing down the eBay river includes South African newspaper coverage, including recaps of his life published on the day of his death as well as other important events including the Mandela funeral. There also seem to be quite uniquely South African items offered including political memorabilia.

The film, sad to say, is getting deservedly mixed reviews. It restages highlights of the anti-apartheid struggle like the Sharpeville Massacre of 1960, but in the long run most people will consider it forgettable. When they want their own piece of Mandela we predict they’ll want for a book.

As we head into 2014 here are some Mandela prices currently asked and realized:

Bauman’s in NY has a signed American first, later and much more expensive.

Still it is still possible to find copies of the book sans autograph for much lower prices in the American first.

The bulk of what was sold in last few years for individual pieces and lots listed in the AE database was sold for $5,000.

On AE there were 88 lots that were all or part Mandela offered within the last 10 years. For the majority the results were if anything underpriced, and many in excellent shape.

It is easy to predict that popular Mandela titles and ephemera will hold its value and be with us for years to come. We’d also venture a guess that values will stay solid but the increases will not be astronomical, as he signed his name a great many times.

The authentic historical material as it is assembled and offered for sale could bring some of the best prices of this century, but one would be surprised if South Africa would allow it to go out of the country.

AE joins the rest of the world in mourning the passing of this great man whose life gives an example of the difference it is possible for one person to make – the patience to carry on in the face of great odds and rare ability to forgive.

It is no wonder that the people of our own time are sure to want the visible manifestations of this giant of the 20th century.

Here is a brief lists of books by and about Mandela as published in 2013 by USA Today.

Long Walk to Freedom: The Autobiography of Nelson Mandela
By Nelson Mandela
"No one is born hating another person because of the color of his skin, or his background, or his religion," Mandela writes in this comprehensive autobiography, published in 1994. Beginning with his early life, the memoir recounts Mandela's rise to leadership and his thoughts during his 27-year imprisonment, building up to his election as president of South Africa in 1994. The basis for the current movie, Mandela: Long Walk to Freedom.

Conversations with Myself
By Nelson Mandela (paperback edition has a foreword by Barack Obama)
Mandela opened his personal archive for this collection of letters, prison diaries, calendars and transcripts from more than 50 hours of recordings, which gives readers a raw, unfiltered glimpse into his mind-set. The book, published in 2010, also contains unfinished passages Mandela wrote in the process of putting together Long Walk to Freedom.

Nelson Mandela: A Life in Photographs
By David Elliot Cohen, text by John D. Battersby
Nelson Mandela was a man of words, but photos of his struggle are often just as moving. This 2009 coffee-table book mixes rarely seen images and more iconic photos that encapsulate Mandela's career – from activist, to prisoner, to Nobel Peace Prize-winning symbol of compassion – and pairs them with text by South African journalist Battersby.

Playing the Enemy: Nelson Mandela and the Game That Made a Nation
By John Carlin
"Sports has the power to change the world," Mandela once said. Carlin's book, which was adapted into the 2009 movie Invictus (directed by Clint Eastwood, starring Morgan Freeman and Matt Damon), tells the story of how the leader used the finals of the 1995 rugby World Cup to help mend a racially divided South Africa.

Long Walk to Freedom (for children)
Abridged by Chris van Wyk, illustrated by Paddy Bouma
Paired with vibrant illustrations, van Wyk adapts Mandela's best-selling autobiography for the younger set, covering his childhood, education and the forces that led him into the public sphere as a political activist.

AE Monthly writer Susan Halas can be reached at wailukusue@gmail.com