$160 Million to be Refunded E-Book Buyers 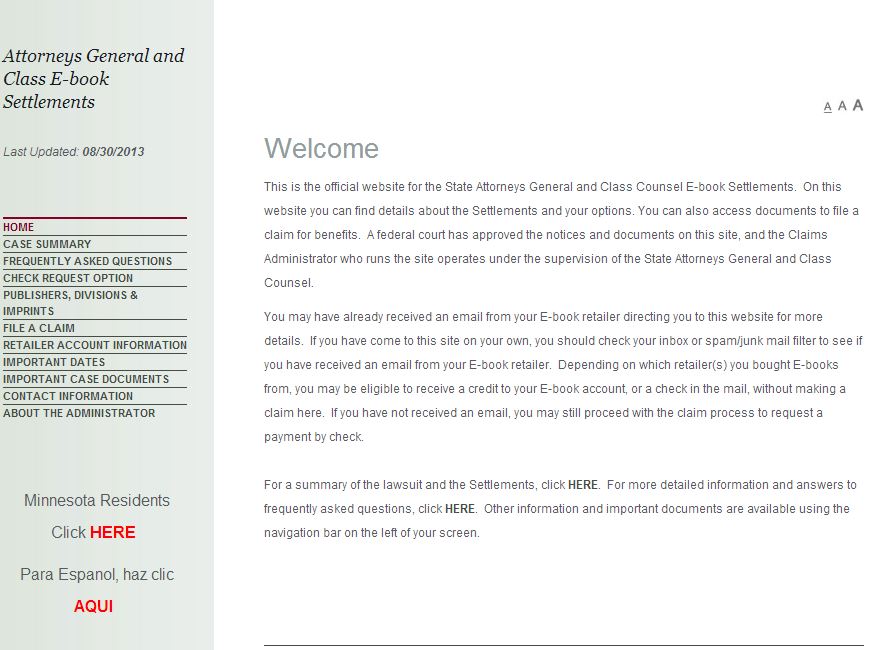 The Attoneys General website provides information on making your claim.

If you purchased electronic books during the past few years, there is a good chance you can participate in a settlement of over $160 million arising from antitrust lawsuits. Your share may not be quite so spectacular as that total number sounds, but a few extra dollars never hurt anyone. And, the more you read, the more you may be entitled to receive. Think of it as a reward for reading.

The chances are that if you are among the class of e-book readers entitled to a refund, you have already heard from your merchant. The largest e-book merchants – Amazon, Barnes & Noble, Kobo, Apple, Sony and Google, should have contacted you already if you qualify. However, in case they missed you, or you purchased electronic e-books elsewhere, you need to pursue your rights quickly. If a claim was not made by a merchant on your behalf, you have only until October 21, 2013, to file your claim if you wish to participate in the settlement.

Five publishers have agreed to provide the roughly $160 million dollars that is to be returned to to e-book buyers. Those publishers are Macmillan, Penguin, Hachette, HarperCollins, and Simon & Schuster. However, there are many other imprints that represent subsidiaries of these companies that are also covered, so some less obvious e-books will also qualify for refunds. Almost $70 million in settlements from Hachette, HarperCollins, and Simon & Schuster have already been approved by the court. A larger settlement of over $90 million from Macmillan and Penguin is still before the court, with a final decision to be made in December. We don't see any reason why these would not be accepted too.

To qualify for a refund, the e-book must have been purchased between April 1, 2010, and May 21, 2012. The purchaser must be a U.S. resident (credit card billing address is used to determine residence) and be an individual, not a business, library, non-profit, etc. You don't have to participate in the settlement if you wish to sue the publishers yourself, though it's hard to imagine why anyone would want to take on that burden and expense.

The estimated refunds you will receive are $3.06 for each book that appeared at any time on the New York Times bestsellers list. If they did not, the refund is $0.73. Most of the retailers mentioned above will provide you with credits toward the purchase of new books. However, you have the right to receive a check instead if you prefer. Sony and Google plan to provide refunds via check. Minnesota residents are expected to receive a slightly higher refund as that state entered a separate settlement earlier with the first three publishers.

The retailers (except Apple) were not participants in the alleged antitrust activities. They are simply facilitating refunds for the actions of the publishers. According to the suit, the five publishers and Apple conspired to set higher prices for e-books, forcing merchants, Amazon in particular, to sell e-books at higher prices. The publishers, without admitting guilt, decided to settle the case and provide the $160 million for refunds. Apple was also sued for conspiring with the publishers to fix prices but contested the action. A court recently convicted them of the charge. However, Apple has appealed the conviction, and no amount of damages will be assessed until and unless the conviction is upheld on appeal, or Apple decides to reach a settlement. It is not known how an eventual confirmation of Apple's conviction or a settlement might impact the individuals who are beneficiaries of the current settlement.

To find out more about the settlement and whether you qualify for a refund, the attorneys general have set up a website that can be found at ebooksagsettlements.com/Home.aspx