To the end Ends of the Earth 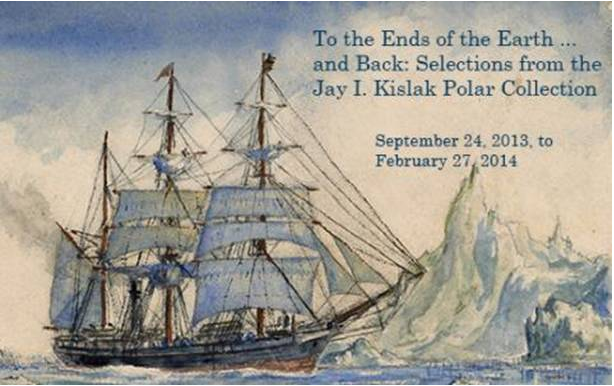 An exhibition of material from the storied Collection of Jay. I. Kislak

Selections from the stellar collection of Jay I. Kislak are on exhibit at the Osher Map Library from September 24th to February 27th.  The Osher Library is part of the University of South Maine in Portland.

“The Osher Map Library is pleased to present To the Ends of the Earth . . . and Back:  Selections from the Jay I. Kislak Polar Collection, an exhibition curated by Arthur Dunkleman, Director of the Jay I. Kislak Foundation, Miami Lakes, Florida.  The exhibition offers a historical overview of polar exploration and the ongoing process of globalization as depicted in maps, charts, books, and artifacts from the Kislak Polar Collection.  It begins with the Greek and Roman concepts of the “frigid zones,” as the polar regions were first named, continues with the Renaissance idea of terra australis [the supposed southern continent] and the often fatal search for the Northeast and Northwest passages from Europe to Asia, and ends with the ultimate challenge:  to reach the South Pole, the end of the earth.  The exhibition includes over eighty objects that span five centuries.  They document not only Western expeditions to the Arctic and Antarctic but also the impact of those expeditions on popular culture and globalization.

Jay I. Kislak, a prominent collector of maps, assembled the Kislak Polar Collection over many years, collecting rare books, manuscripts and other artifacts related to world exploration and especially the New World and the polar regions. Kislak and his wife, Jean, residents of Maine and Florida, are lifelong connoisseurs and supporters of the arts.

The Jay I. Kislak Foundation was established in 1984 to foster greater understanding of the cultures and history of the Americas. In 2004, the foundation donated more than 3,000 rare books, maps, manuscripts and artifacts related to the Early Americas to the Library of Congress in Washington D.C.

The Jay I. Kislak Collection is the core of Exploring the Early Americas, an ongoing exhibition in the historic Thomas Jefferson Building at the Library of Congress and is integral to the library’s program of research, education, and public activity.  During the past decade the foundation has focused on the early history of navigation, exploration and discovery, with particular emphasis on the polar regions.   Selected highlights of the Kislak Polar Collection are on display in this exhibition.

Link to University of South Maine, the Osher Library