A Success for the London Antiquarian Book Fair 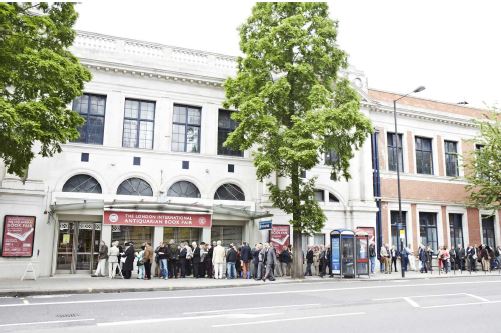 Crowds lined up for the London Antiquarian Book Fair.

Organizers of the London International Antiquarian Book Fair report a most successful three-day run this past month. The annual fair at Olympia saw an increase in attendance, sales just slightly shy of last year's total, and a few very hefty purchases along the way. Serious buyers have been putting their feet back in the water again after the very difficult economic times of a few years ago. The economy rises and falls, but books persevere, as they have done for over 500 years.


Traffic was up 18% the first day of the fair, Thursday, June 18, with over 1,000 people making their way through the doors. Attendance continued up the remaining two days as well. Chairman of the Fair, Brian Lake, said, “The ABA Fair was a great success – more exhibitors, more visitors, than 2012 – with attendance up by nearly 20% over the three days.” Sales totals for the 175 out of 186 exhibitors who were offering books for sale were £3.35 million ($5.24 million is U.S. dollars). If books are not selling any more, someone forgot to inform the attendees at this fair.


Of course, some dealers were particularly pleased, and as those in the trade well know, it is often that one very important book that can make your day, fair, or even your year. Peter Harrington of London sold a copy of Mary Shelley's classic Frankenstein; or the Modern Prometheus, a first edition from 1818. The purchaser was from America. The price was a nice even £110,000, or to the American purchaser, $172,000. It was a very good fair for Harrington, regardless of whatever else happened. Pom Harrington was quoted with an understated, “We had a very good fair.”


Americans weren't the only foreigners attending and buying at the fair. A Swedish bookseller reportedly sold several items to a retired professor from Shanghai University in China. They included a 1936 book of pictures from China by a Swedish photographer. The total for the purchase was £30,000 (US $46,950). This serves as a reminder that even if some traditional markets are slow, new collectors are appearing in such far off markets as China, Russia, and the Middle East, and many of these people are flush with new money.


The organizers also reported a notable success arising from the tradition of dealers buying from each other. In one instance, a dealer who bought two books at the fair sold them to an American client over the phone for £125,000 (US $195,000). No names were given nor how much the second bookseller paid the first.


The ABA (Antiquarian Booksellers' Association) of England will be holding their next fair on November 1-2, the smaller annual Chelsea Fair. Next year's Olympia Book Fair has been tentatively set for May 22-24, 2014.