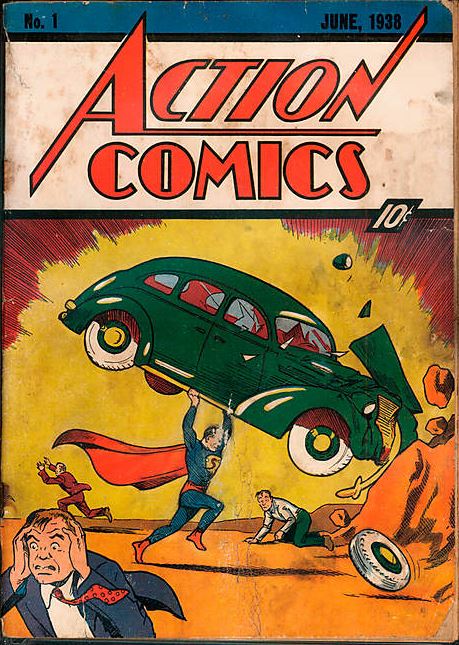 Superman was introduced to the world with a bang.

There's nothing quite like the story of finding a valuable old book in an attic, garage sale, eBay, or the like. Once in awhile, these dreams actually come true. One man who can attest to this is David Gonzales, from Minnesota.


Mr. Gonzales is a small contractor. Normally, he is hired to help people with remodeling projects. However, this time, with some money put aside, he bought a small home himself, a “fixer-upper” to fix up. The plan was to resell it when he finished.


His find was not in the attic or basement. It was fortunate he was a remodeler, as otherwise he never would have found it. When he started pulling the walls off his 1938 house, he found old newspapers which had been used as insulation. He also found something else. Hidden in the walls was a copy of Action Comics #1, published in 1938.


To those not aficionados of comic books, that may not mean anything. To those who are, it is the “holy grail” of comic book collecting. It is the most valuable comic book ever sold. A copy sold for over $2 million at auction recently. This comic is no joke. What makes it valuable is that Action Comics #1 introduced the character of Superman to the world. He remains without peer. There have been many other superheroes introduced over the years, and Batman could give him a run for his money, but ultimately, there is only one superest of the super, and that is Superman. Clark Kent could not have imagined what he was starting when first he put on a cape in a phone booth (aside: where does Superman dress now that everyone uses cell phones?).


Now, Mr. Gonzales' copy is not worth $2 million. That copy was the best one known, a 9 on the 10-point comic grading scale. This copy only comes in at a 2. Seventy years in the walls can do this to you. Actually, it was probably not so much the years in the walls, where darkness preserved its colors, but the lack of care exhibited in sticking it in the walls in the first place. It was somewhat brittle and not as clean and smooth as a copy off the rack. According to the wire services, something else happened after he found it. Reportedly, a relative handled it and wanted a cut of the money, leading to a dispute in which the back cover was torn. Doing that was the equivalent of tearing up thousand-dollar bills, many of them.


Nonetheless, Mr. Gonzales still realized he had something special here, though he did not know how special. He took the comic to a comic book dealer, and then to Comic Connect. Comic Connect is a noted online comic auction house. They recognized just how valuable it is. Even a first edition Superman with a 2 rating is valued at $110,000. They put it up for sale. Bidders recognized its value too. They saw $110,000 as way too much of a bargain for this copy. When the bidding closed on June 11, the price realized was $175,000. Mr. Gonzales could not have dreamed of even a small fraction of this amount to be made on the house. However, he is not selling it. The auction house reported that he plans to finish fixing the house, but “swears he will never sell it.” As for the money lost to the damage, he apparently doesn't mind. He told a reporter that money does not mean that much to him. He would rather work for his money.