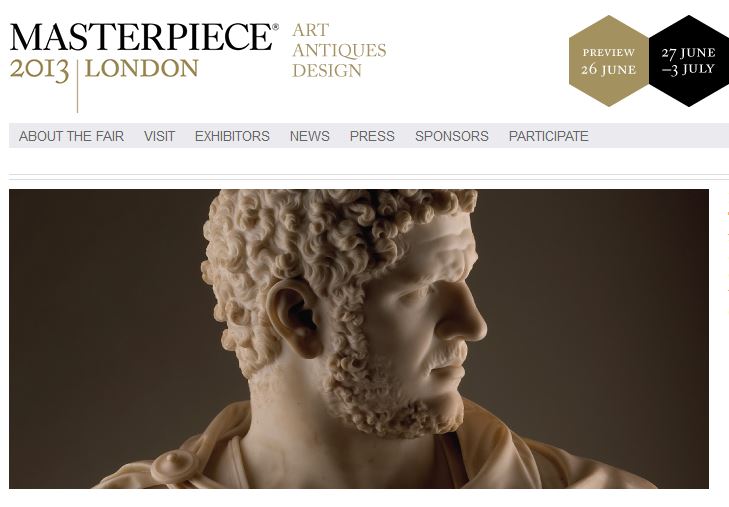 Masterpiece London will run this year from June 27 – July 3.

Masterpiece London is scheduled for its fourth annual appearance this year from June 27 – July 3. Set on the South Grounds of the Royal Hospital Chelsea, London, this annual fair brings in exhibitors, collectors, and curators from the fields of art, design, antiques, and more. The folks at Masterpiece also promote the fine dining that will be available. It is described as “the ultimate in elegance, quality, luxury and sophistication.”


Along with the expected merchants of the arts, we find exhibitors coming from the field of books and paper. It is a trend we have noticed recently at several international exhibitions of art for the well-heeled. The categories may be different, but dividing lines between books and art are becoming blurred. The audience for fine art is likely to find similar appeal in fine books and other works on paper. Events like Masterpiece allow those in the book trade to reach out to logical new audiences.


Among the exhibitors at Masterpiece this year is Shapero Rare Books, down the road in London. One of the items they will display is the book that perhaps more than any other blurs the line between art and books. It is The Works of Geoffrey Chaucer, the 1896 edition published by the Kelmscott Press. Kelmscott was the brainchild of artist and writer William Morris. Displeased with the work of mechanized presses of the day, he sought to return to the handiwork of earlier generations of printers. It was the birth (or rebirth) of what is now known as the fine or private press. The greatest of all of the productions by this father of the fine press was The Works, or as it is now commonly known, the Kelmscott Chaucer. It took four years to produce. Morris died the year it was finished.


Not all books can be completed so quickly. Shapero will also be displaying Edward Kingsborough's Antiquities of Mexico. This monumental work of drawings of artifacts relating to indigenous culture in Mexico took 17 years to complete. Kingsborough was one who believed that the natives of Mexico were remnants of one of the Lost Tribes of Israel. He hired Italian painter Augustine Aglio to search through the collections of libraries and private collectors around Europe and paint pictures of the Mexican manuscripts he found. The project cost £32,000, an enormous sum at that time, and poor Kingsborough died in debtor's prison as a result.


Others from the book field exhibiting this year include Daniel Crouch Rare Books of London, Peter Harrington, also of London, and Librairie Thomas-Scheler of Paris.


For more on Masterpiece London 2013, you may visit their website at www.masterpiecefair.com.