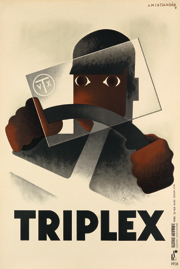 A.M. Cassandre's 1931 design for Triplex, a safety glass for vehicles

In the print category it was once mostly the books and their bindings and they are still essential but no longer even the unqualified leading element in the works on paper category.  These days displayable printed material routinely makes headlines no doubt reflecting both Internet access to images and the increasing preference for material that can be displayed.


Another aspect of strengthening interest and the emergence of categories is the increasing interest in 20th century collectibles – often material resonant with memories and awareness.


These two elements come together in the upcoming sale of Art Deco Posters, advertisements and examples of typography at Swann Galleries on May 13th.  This is their annual sale in the category and it’s an important event.


The following is taken from the company’s explanation of the sale.