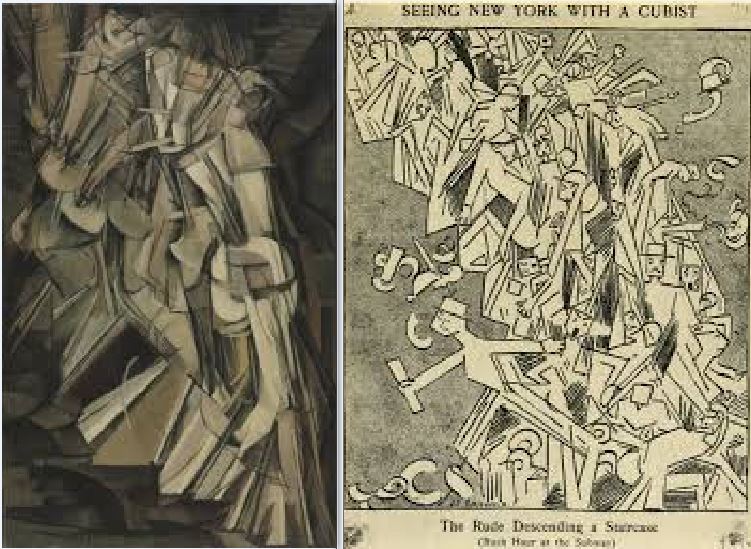 The real Descending Nude and its comic interpretation.

Of all the pieces exhibited Nude Descending a Staircase by Marcel Duchamp generated the biggest buzz, most of it irate, and indeed the latter day commentary notes that the gallery where the painting hung was so crowded that it was difficult to get a glimpse of it. It was described by one critic as “an explosion in a shingle factory.” Cartoonists everywhere had a field day with the image itself and also mocked the style. No less an art authority than Theodore Roosevelt added his two cents:

“The Cubists,” he wrote, “are entitled to the serious attention of all who find enjoyment in the colored puzzle pictures of the Sunday newspapers. Of course there is no reason for choosing the cube as a symbol, except that it is probably less fitted than any other mathematical expression for any but the most formal decorative art.


“There is no reason why people should not call themselves Cubists, or Octagonists, or Parallelopipedonists, or Knights of the Isosceles Triangle, or Brothers of the Cosine, if they so desire; as expressing anything serious and permanent, one term is as fatuous as another.


“Take the picture which for some reason is called 'A naked man going down stairs.' There is in my bath-room a really good Navajo rug which, on any proper interpretation of the Cubist theory, is a far more satisfactory and decorative picture.”


Everything in the exhibit was for sale. Commenting on prices James Panero reviewing “The Armory Show at 100” observed, “While most of the work at the Armory would be considered a bargain by today’s standards, not everything was cheap. The Cézanne purchased by the Metropolitan was listed at $8,000 and sold for $6,700 — or, adjusted for inflation, about $150,000 today. All told over its entire run, the Armory Show sold 35 American paintings and sculptures (for $11,625 total), 130 foreign works (for $12,886 total), and 205,000 tickets, leaving it with a slight profit at the end of its exhausting three-city run (New York, Chicago and Boston).”


In the years between 1913 and 2013 much has been written about the show, the Association of American Painters and Sculptors that presented it and Walter Pach, Arthur B. Davies and Walt Kuhn - the three American men largely responsible for its content. The work of Davies and Kuhn and the work of their fellow Americans were overshadowed by the stir the event and the imported European art created.


They knew they had something new and provocative and fully expected the response would be huge. “The sole object is to put painting and sculpture on exhibition,” wrote Davies, “so that the intelligent can judge for themselves by themselves…forces which can not be ignored.”