Somewhere over the rainbow . . . 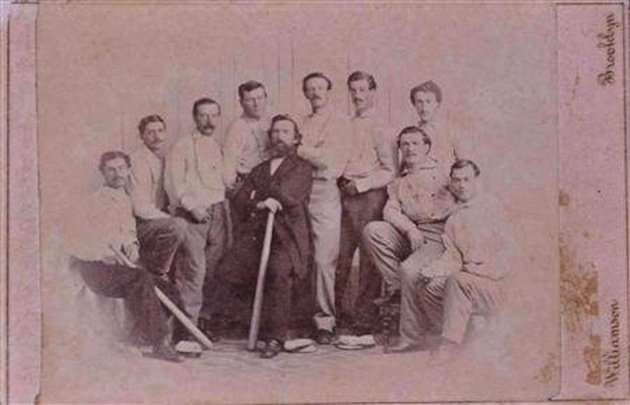 Some people buy lottery tickets.  Others make discoveries at yard sales.  One of the latter recently scored a big win with the purchase of an 1865 carte-de-visite [CDV] of the Brooklyn Athletics, a founding member of the National Association of Base Ball, forerunner of today’s National League.


The lucky weekend warrior was more than lucky.  He had to recognize the card was potentially valuable, agree to pay a price, $100 for it and other sundries, and then figure out how to sell it.  He sent it to a firm in New York with a price of $5,000.  They sent it back, “no thanks.”  He then heard that Saco River Auction this past August sold an 1888 Michael “King” Kelly card for $72,000 and received wide publicity for it.  The owner of the Brooklyn Athletics example, learning of Saco’s success, submitted his card and the auction house is now back in the news.


Floyd Hartford, on being contacted, with 40 years in the trade and the last five as Saco River, knew what to do.  “We carried it down to Boston to a specialist for authentication.  It’s real and it’s very early.”  Then armed with this information he advertised the sale.


For the consignor from Baileyville, Maine who had bought the card and other debris for $100, it must have been a satisfying moment.  A few months earlier what he would have sold for $5,000 would earn him close to 20 times that.


So how did the willing bidders find this out-of–the way auction?  New York and New England newspapers covered it.  Local and regional television stations gave it airtime.  At some point the news went viral and in Cuba it got into print.


So it’s a refreshing story.  Luck and determination met head-on in Maine and the winner was every weekend warrior, who their spirits restored and their pickups tanked up, are out on the hustings, as we speak, in search of the next great discovery.


Floyd, reflecting on the sale, said “It’s the biggest item I ever handled and I’m glad for both buyer and seller it worked out well.”