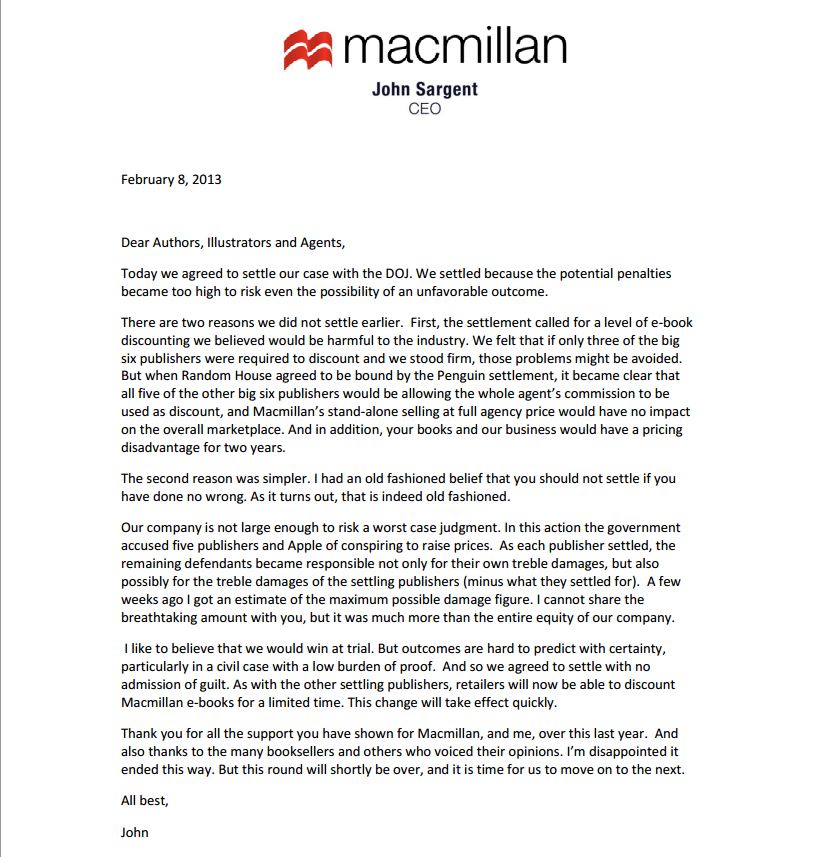 An open letter from Macmillan's CEO.

The last of the publishers sued by the U.S. Department of Justice for alleged price fixing of electronic books has thrown in the towel. Macmillan has now joined Hachette, HarperCollins, Simon & Schuster, and Penguin in acquiescing to DOJ demands. The first three agreed early on, Penguin held out until December, and now the last of the publishers has given in. That leaves only their alleged co-conspirator and ringleader, Apple Computer, to face the charges alone. How Apple proceeds waits to be seen. Previously, they not only opposed the settlement, but considered it a violation of their contractual rights.


According to the DOJ, the problem arose out of the publishers' displeasure with the low prices Amazon was charging for their e-books. While the publishers were receiving their desired wholesale prices, Amazon was barely marking them up. The online retailer was more concerned with dominating the retail e-book trade than with making profits now. The publishers were unhappy because they feared customers would become too accustomed to such low prices, and that it would provide too much competition for more expensive printed books.


When Apple decided that they too wanted to sell e-books, the publishers allegedly saw an opportunity to push up prices. This was agreeable to Apple as that firm, unlike Amazon, was more interested in making profits now, rather then setting up long-term dominance in the trade. Allegedly, Apple negotiated identical contracts with the five publishers, keeping each apprised of their progress. The agreements provided that the publishers would only sell their e-books according to “agency pricing.” This meant that all retailers, including Amazon, would have to sell at the prices the publishers set, rather than what they chose. Based on the set retails, the wholesale price would allow for an identical 30% profit for all retailers, be it Apple or Amazon. No retailers would be permitted to compete on price.


The Department of Justice considered this to be illegal price fixing and sued. Three publishers settled quickly, then Penguin, and now Macmillan. Macmillan remained strong in its opposition to the suit and in its belief it had done no wrong, but in the end, according to a statement from CEO John Sargent, the risk became too great to continue the fight. In a public letter, Sargent wrote, “Our company is not large enough to risk a worst case judgment.” He said that in the worst case scenario, if they lost, they could not only be held accountable for their own treble damages, but treble the damages attributable to the publishers who settled their parts of the case. “A few weeks ago I got an estimate of the maximum possible damage figure,” he wrote. “I cannot share the breathtaking amount with you, but it was much more than the entire equity of our company.”


The settlement provides that Macmillan is to refrain from imposing agency pricing for at least two years, along with various reporting and other provisions that run as long as five years. It should be noted that the concept of agency pricing is not being challenged, and the ban lasts only two years. After that, Macmillan will be free to reimpose agency pricing and force Amazon to sell their books at the same higher prices they attempted to impose last time. What they are prohibited from doing in the future is conspiring with other parties to impose such pricing. When Macmillan (allegedly) entered into such conduct in agreement with the other publishers, it assured that all would charge higher prices. Their books would not be at a competitive price disadvantage to those offered by other publishers. In two years, they can impose such pricing on their retailers again, but they will have do so without an agreement from others to do the same. If the others don't do the same, Macmillan's books will likely be more expensive to buy. Consumers might opt to buy books published by others which sell for less. Going forward, Macmillan (and the other publishers) cannot act in concert in establishing prices, nor may they even discuss or reveal to each other what pricing strategies they will use.


When the publishers entered into their agreements with Apple, books that Amazon had been selling for $9.99 were pushed up to $12.99 and $14.99. After the settlement, Amazon reduced many of those prices back down again. It would not be terribly surprising if the same happens now with some of the Macmillan titles.