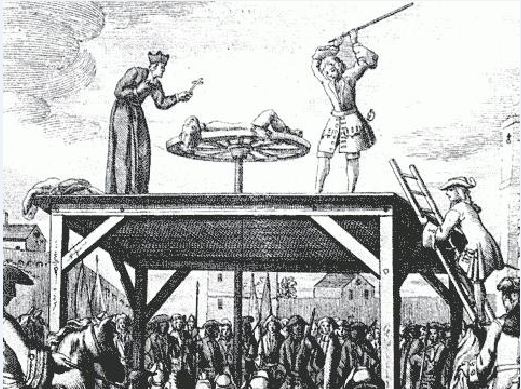 Cartouche met his fate on the wheel, a gruesome punishment.

The name of Cartouche became notorious. The government appointed more watchmen in Paris but, as the book reads, “the robbers would go out in groups at night to fight and defeat the watchmen.” We hardly imagine how dangerous Paris could have been! Bunches of criminals fighting hords of watchmen in the streets? Sounds like the aftermath of a regular football match...


Long run short catch, as the saying goes. Aware of a conspiracy within his troops, Cartouche assembled his men in the night of October 11, 1721, and asked a particular traitor to step forward. “They cut his throat," reads the book, "tore away his private parts and slashed his face so he could not be recognized.” The mutilated head was found in the Rue du Regard, Faubourg St Germain. Unfortunately for Cartouche, one of his main lieutenants who had participated in the murder, Mr. Du Châtelet, was soon identified and arrested. He had no choice but to give away his master who was soon arrested in a cabaret of La Courtille, and imprisoned. The event was so important, the King was informed as soon as he woke up. “Cartouche was put in the jail of Le Grand Châtelet, one hand tied on the belly and the other one in the back, with six bowmen guarding him at sight.” That did not prevent him from escaping. But he was caught a few hours later and was bound never to recover his freedom.


Lots of people went to visit him in his cell, including some distinguished ladies from Paris and “Mr. Legrand, the author of the comedy entitled Cartouche, desirous to share with him the profits of this work, and who gave him 100 écus.” Several engravers came to draw his portrait while the first stories of his life were printed. They sold extremely well all over the country and even in foreign countries.” According to the National Library of France (BNF), the first edition of the Life & Trial of Cartouche... was published by Machuel, in Paris, in 1722. It remained a best-seller for more than a century. The BNF thus lists 17 editions, most of which were printed in the first part of the 19th century, outside Paris. The text hardly differs, each book usually features 70 pages or so. The most sought-after editions are those featuring engravings – up to 4 for the most illustrated ones. A late 18th century edition features a woodcut on the title page, of Cartouche tied to the wheel where he was laid in Place de Grève, after he had endured the “extraordinary question” - he suffered the torture of the “brodequins”, which consisted in breaking the bones of one’s legs in a very painful way. He did not give away his accomplices, though – not until he realized they would never come to save him. That did not save him from being put to death, though – but as he had repented to God (as the story goes), the executioner, having broken his last intact bones, discreetly strangled him from under the wheel... they were Christians, after all.