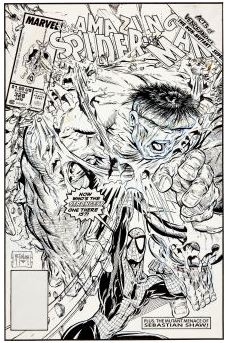 Spiderman takes on the Hulk, and takes in $657,250 for his efforts. Courtesy Heritage Auctions.

It is time once again to look back at the Americana Exchange's annual listing of the Top 500 sales at auction in the books, works on paper, and related ephemera field for 2012. It was an unusually active year, but likely the new norm. The volume of sales at auction has been building steadily and there is no reason to believe the trend won't continue. For 2012, there were again 11 items in the million dollar category, but #1 was almost $10 million, nearly four times the highest priced item of 2011.

Perhaps most telling was #500. In 2011, that item sold for $52,170. In 2012, #500 sold for $71,700. That's an increase of 37%. What's going on here? Are prices rising that much? While the top end appears to be the strongest part of the market, prices aren't growing that rapidly. What we are seeing is more books coming to auction. As more books are offered at auction, naturally, more high-priced ones appear. Auctions are taking more of the market, like the listing sites did a decade ago, except the auctions garner more of the high end books.

Another trend that continues is the shift to more ephemeral items, manuscripts, maps, images, and items other then traditional books. Visual and unique are increasingly valuable attributes. People like things they can easily display on a wall, and things that are one of a kind. The result is that images and manuscripts continue to generate increasing interest, even as traditional books struggle a bit for attention. Another important factor is familiarity to one's own lifetime experiences. This year the list is filled with comic books and comic book art, mainly U.S. action comics, interspersed with Hergé's French cartoon, Tintin. These are items today's buyers grew up with in their youth.

In a moment, we will look at the top 10, but first, here are a few other choices from the list. At the end of this article is a link to the entire AE Top 500.

Item 495 is a series of documents pertaining to the shooting of Johnny Torrio in Chicago in 1925. One of those documents is a signed deposition of Torrio's protege, Al Capone. Asked how many times he has been arrested in Chicago, Capone replies, “Every time something happens I get arrested.” Capone says he did not know who did the shooting, but when asked if he would say if he did know, Capone responds, “No, I value my life too much to tell if I did know.” $72,000.

Item 422 is a minor document signed by an obscure president. It is a ship's passport, a routinely issued document from presidents at the time. What makes this so valuable is that it was signed by President William Henry Harrison. Harrison took ill shortly after being inaugurated and died a month later. His signature as president, therefore, is extremely rare. $80,500.

Item 335 is an archive of memorabilia pertaining to Edgar Allen Poe, including family correspondence, pictures, a lock of Poe's hair, and the engagement ring he gave his childhood sweetheart when finding her later in life. Poe died before they could wed. $94,000.

Item 191 is the contract Sitting Bull signed to appear in Buffalo Bill's Wild West. The Sioux Chief toured with Buffalo Bill during 1885. $155,350.

Item 143 is the original manuscript and a typescript for an F. Scott Fitzgerald unpublished short story, circa 1920, entitled TheI.O.U. $194,500.

Item 117 is an autographed manuscript of the AveMaria by composer Giuseppe Verdi. $232,400.