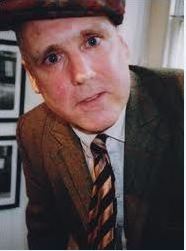 Carl Williams is “stoked” to be speaking at Harvard.


The London based Maggs Bros. specialist is making a visit to Houghton Library on Wed., November 14 to give a talk on collecting the counter culture. (See event details at the end.)


Though the American surfer slang sounds unlikely overlaid with a broad English accent, there is no denying his enthusiasm for his subject and his pleasure at being asked.


Equally unlikely is the pairing for two of the book world’s most venerable and posh institutions to focus on popular culture in all its many low-brow manifestations.


Edward Maggs, the head of the firm himself, strongly refuted the idea that there is anything stuffy, much less retro or backward about the high end booksellers founded by his ancestor in 1853. “We do cutting edge things all the time,” he said on the line from London.


Mr. Maggs (“Call me Ed”) pointed out the company issued catalogs of the avant-garde in the 1920s and “offered the French symbolist poets in the 1930s.”About the same time it was a leader in the collecting of Women’s Literature." “At Maggs, we look forward, not back,” he said.


Guest and host agree there is broad and growing interest in the field where punk and posh meet. “It is demographic…and only likely to get stronger as the boomers age,” Williams said. “Like other generations they’re collecting what they remember of their youth.”


Leslie Morris, Curator of Modern Books and Manuscripts at the Houghton Library said the impetus for the invitation came from the deposit of more than 50,000 items related to psychedelics, chemistry and botanicals in all forms assembled by Julio Mario Santo Domingo, a Columbian businessman. The collection was deposited by the family with Harvard after his death in 2009.


“This is a major collection,” she said, “and it will definitely fill in many of the gaps in our holdings.”