The Trinity College Library Obtains Some Classic Books on “Medicine” 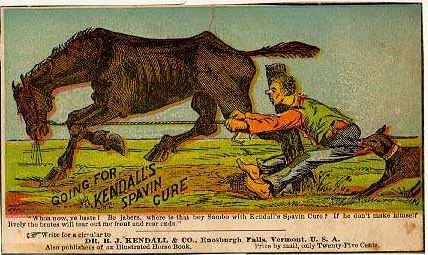 Dr. Kendall could cure you and your horse.

We recently received a copy of the first electronic bulletin from the Watkinson Library at Trinity College in Hartford, Connecticut. It is necessary to spell out which Trinity College as there are at least three, appropriately enough, of them. It comes from Richard Ring, Head Curator and Librarian, and it provides an update of goings on at the library. This newsletter is a good idea. I'm sure there are many other libraries that already provide these, and many that don't but likely should. It is good to let your supporters know what you are up to. Absence does not make the heart grow fonder.


One of the interesting stories deals with a group of new/old medical books the library has received. Medicine from past centuries is always entertaining. It's one of those things you can experience from afar, all the while being thankful you didn't live in those times. Of course, a hundred years from now, our great-grandchildren will say the same thing, wondering how we endured the barbaric practices of early 21st century medicine. Anyone who has ever “experienced” a colonoscopy will understand this point.


Medical treatment from a century ago was not limited to primitive but still useful practices. It was the era of patent medicines. Some were obviously quack remedies that their promoters knew were worthless. Others were probably sincere efforts even if we now know they were useless. The Watkinson newsletter points us to a posting on their website about some books described above, and if the promises appear bogus today, just read some of those advertisements you see now about things that will cleanse your body...internally...and you will quickly realize we have not come as far as you think.


One of the library's “new” books is The Doctor at Home, Illustrated. Treating the Diseases of Man and the Horse, by Dr. Burney James Kendall. This is an 1884 book by the man who the previous year founded the B.J. Kendall Company. Perhaps you may not find this title troubling, but I am not comfortable getting my medical advice from a book designed to treat humans and horses. I prefer species-specific cures. Dr. Kendall started by producing a “cure” for spavin, a disease of horses' joints, then moving on to human cures. As the good doctor tactfully points out, this is “a work so plain and simple in its language that the most ignorant will have no difficulty in understanding it.” Perhaps even a horse could understand it. If you can't, Kendall notes that you are someone who “should have the attention of some intelligent physician.” Certainly this would be preferable to the attention of a physician as stupid as you are.


Dr. Kendall and his company made quite a lot of money. He then turned the company over to some friends and moved from New England to the Midwest, expecting ongoing payments. Reportedly, the company continued to do well, but Dr. Kendall didn't get what he expected. He would be involved in financial litigation and apparently died with little money left. Depending on who you believe, he ended up an embittered, or just a disappointed man.


“My own belief is, that there are no diseases for which successful remedies do not exist; but, owing to our ignorance, their prompt and timely application is not made, and thus the lives of millions are needlessly lost.” This would be quite a claim today, but in 1845? That was before the discovery of antibiotics when a myriad of diseases killed millions now saved with a couple of pills. There were already known cures for everything? Perhaps you would like to know what those cures are. Fortunately, the next author, Samuel Sheldon Fitch, is here to enlighten you.


Another addition to the collection to the Watkinson Library is Six Lectures on the Functions of the Lungs, by Dr. Fitch. Fitch designed various medicines and devices to cure us of our ills, and he was generous enough to make them available, for a price. He wrote several books and along the way developed “cures for consumption, asthma, heart diseases, bronchitis, head-aches, dyspepsia, ague and fever, liver complaint, diarrhoea, baldness and hair loss, and whatever else ailed you.” For example, Fitch explains that many fatal heart diseases are caused by the chest being too small. “I have often cured seemingly fatal diseases of the heart by enlarging the size of the chest.” Why doctors do not do this today is a mystery (no – breast implants do not qualify as “enlarging the size of the chest”).


Speaking of chest size, and Dr. Fitch does, he explains, “So of Northern nations: we find them always conquering Southern nations, because of their superior physical strength, derived from larger lungs, from breathing purer, denser, and more nourishing air.” Fifteen years before it began, Fitch had already correctly predicted the outcome of the Civil War. Think how many more lives would have been saved if residents of the South had read his book and saved themselves the trouble.