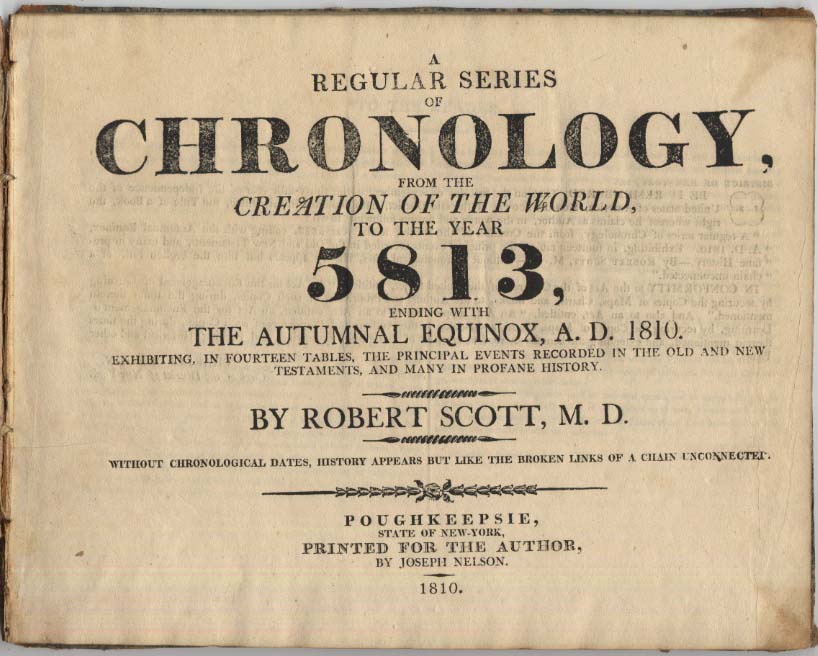 Is this the preface to Clockwork Orange?

A book on eBay recently caught my attention, a Poughkeepsie imprint and an early one – A Regular Series of Chronology from the Creation of the World, to the Year 5813, ending with the Autumnal Equinox, A.D. 1810, exhibiting, in fourteen tables, the principal events recorded in the old and new Testaments, and many in profane history - by Robert Scott, M.D.  It seemed unusual in many respects.


The title page illustrated in the eBay auction listing had, to my eye, a Pennsylvania Dutch look.  The type was large and bold and altogether different from the small and conservative typefaces routinely found in early Hudson Valley printing., the size too out of keeping with Poughkeepsie common practice; 11.25” wide by 9” high.  Most Poughkeepsie printed books were small.


The subject too seemed outside the mainstream.  Dr. Scott sought to reconcile science and the bible by creating charts that dated biblical events on the western Gregorian calendar in use since 1582.  In his calculation the year 1810 was the 5,813th year since the creation of the world, an interesting idea and an example of the fresh, if defective, thinking overwhelming traditional Christian thought in that era.  Within fifty years Darwin would establish evolution as irreconcilable with history as expressed in the Bible.  With or without Darwin the portents of change hung heavy and in Rhinebeck, New York Dr. Scott, believing the Bible to be the revealed word and therefore fully reconcilable with all events historic, completed his rebuttal to the gathering skeptics and the increasingly certain scientific mob.  He would square the accounts.


Christianity had been a heaving throb of subjugation and revolt for almost as many years as the faith had existed, controversies and politics jostling with underlying political structures from its first days.  With the fomenting of Protestant reformation in the early 16th century the Catholic Church then saw a substantial portion of its flock join the reformed movement that later lead, in North America, to the great awakenings and the development of evangelical Congregationalist, Presbyterian, Baptist and new Methodist churches.


Mr. Scott, born in England in 1760 according to the date on his tombstone and hailing from Lincolnshire, came to America in 1794 sailing from London, August 21 and arriving in New York October 10th.  He brought with him the belief that Joseph Priestly’s reconciliation of religion and science was valid.  In an account he later wrote he explained his decision to leave England:


“My reasons were first for the sake of religious liberty, not being able to take the oaths that required of those who dissented from the Episcopal Church; and second for the sake of civil liberty.”  A reference to him in Hasbrouck‘s History of Dutchess County [1909] further elaborates, “He was a man of fine talents and his superior education enabled him to become a very successful teacher.  In 1796 he opened a school in Rhinebeck, and enrolled the children of some of the best families in NYC, among them being Henry Stokes, President of the Manhattan Life Insurance Co., and Robert Colgate, president of the Atlantic White Lead Works.