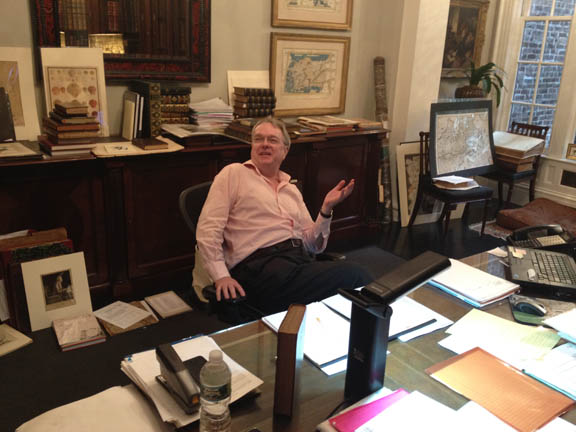 Donald Heald in his domain

When Lewis and Clark went west, they did not go alone.  They had a guide.  When astronauts go into space, they have a team.  They are not always sure what they will find but prepare for what they may encounter.  For serious collectors of printed materials, the greatest have also sought guides; Sabin to help William Menzies and Henry Murphy, Wilberforce Eames for James Lenox, George Smith and A. S. W. Rosenbach to help Henry Huntington, Peter Decker for Fritz Beinecke, H.P. Kraus for his brother Edwin, the Eberstadts for Thomas Streeter, Ken Nebenzahl for his son Frank.   These and many others relied on one or a few dealers to chart their collecting paths.

Such collectors are themselves rare.  They embrace a perspective and pursue it for decades. More try than succeed, though, because the pitfalls and chimera are many.  Success requires steely discipline and patience, coupled with the belief that relevant material eventually will come to market.   When less disciplined, collectors often broaden their perspective to accomodate less germane material, and in that way lose focus that once undone, is difficult to restore.

Three years ago, I had a cup of coffee with Donald Heald, the important American rare book dealer, at the Century Plaza Hotel in Los Angeles during the ABAA’s biennial show in Southern California.  His memory is storied, but that morning he spoke of an unusual skill—of being able to inhabit a collector’s perspective and, without notes or references, turn the collector’s interests into a sequence of printed items to be pursued over a lifetime, presenting exhilarating challenge, and in time, become a remarkable collection.  Armed early with such perspective, a collector’s first decisions could lay the foundation for serious pursuit.  Without such perspective, the sheer volume of possibilities makes success less likely.


About this, some dealers may say this is not particularly unique, that many competent dealers can outline a strategy and fill in spaces, if not from memory, then from diligent study.  But how often will they place a collector’s interests ahead of their own, suggesting goals and possibilities that defer rather than encourage purchases?  In my experience, this is uncommon but not impossible and is often crucial to collecting successfully.


Such an approach—getting the collecting map laid down early—potentially sets the path, if not the arc.  Along the way, life will intervene, but if the path is true, the other variables, time, opportunity and money, will be simpler to manage.  Absent a plan unchecked collecting ambitions will sprout like weeds.  It's that important then to have a plan.