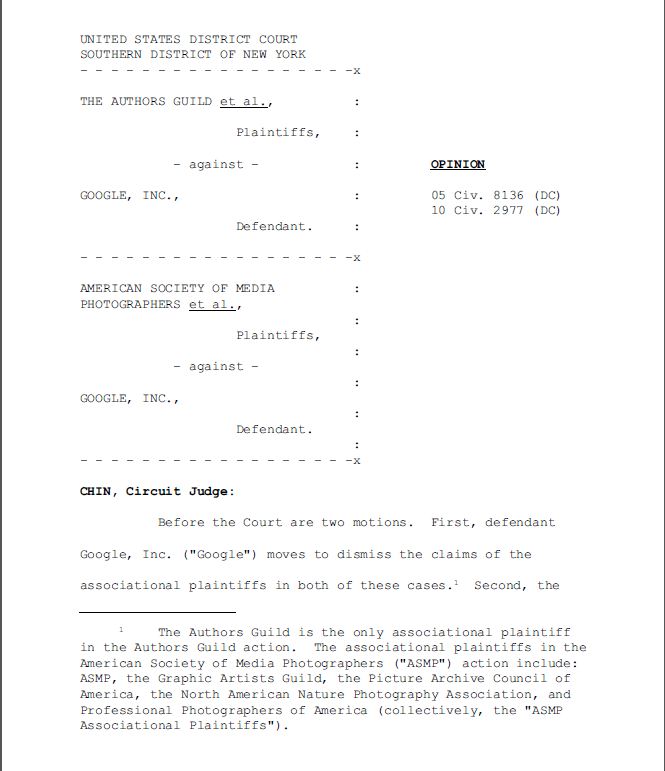 Another brick in the Google Books stonewall.

The latest ruling in the unending Google Books case was handed down a few weeks ago. It was more of a technical than substantive issue involved, but it once again highlights the absurdity of the American judicial system, demonstrating just how much time, money and public interest can be sacrificed in the quest to evade common sense.


The Google Books project dates back to 2004 when it was then known as “Google Print.” Google announced it would begin a project of scanning millions of old books from various libraries to make their content available to the public digitally online. Vast amounts of information, secreted away in libraries, virtually inaccessible to most of the public, would soon be available. Google wasn't the first to effect such a project, but it would by far be the biggest.


This is America, so, of course, within a year, Google was sued. The Authors Guild in particular was upset that Google would make the text of copyrighted books available to the public without paying the copyright holders. Fair enough. Pre-1923 books are no longer under copyright, but later ones may (or may not) be. Most post-1923 books are long out of print, earning nothing for the authors anymore, but some are still actively earning royalties. Those writers (or their heirs) have reason to object to their copyrighted material being given away by Google.


It took two years, but the Authors Guild and a publisher group finally reached an agreement with Google. Google would only show a couple sentences of text (“snippets”) and sell access to the remainder of the still copyrighted works. The copyright holders would get 63% of the proceeds, Google 37%. To get their share of the proceeds, an author or the heirs simply had to notify Google. If they didn't want to participate, then all they had to do was tell Google “no,” and their books would be dropped from Google Books. It sounded like a good deal to the author and publisher groups, but there are thousands and thousands of authors, and not all agreed. Meanwhile all sorts of others insinuated themselves in the project. Photographers whose pictures might appear in a book wanted their cut. The list went on. Everyone wanted their share of a pie that was no bigger than a flea, potential royalties from books that hadn't earned a penny of the same in decades. Even the executive branch of government, desperate to show it can be just as ludicrous as the legislative and judiciary branches, got in the act. Their objection was that Google should first obtain the copyright holders' permission before scanning, not after the fact. Never mind the fact that locating all of these copyright holders would be impossible, preventing these long out of print books from ever being made available to the public again in a practical manner. Common sense could not prevail.


Judge Denny Chin sided with the government and other objectors. He struck down the settlement, telling Google and the author and publisher groups to revise it. Such a revision has proven elusive. The court has said “no” to requiring the copyright holders to affirmatively object to their participation in the settlement, but no practical means exists for Google to figure out who owns most of these copyrights to ask their permission. Those rights for a book published in 1925 might today belong in equal shares to 50 great-grandchildren with different last names from the author, scattered all over the world. The irrationality of such a demand did not move the court.


This latest court decision came over a motion to allow authors to proceed against Google as a group, that is, a class action lawsuit, rather than requiring each author to open their own individual lawsuit. Considering how little the value of most of these copyrights, Google undoubtedly would prefer each author to have to sue on their own. The cost of suing would be far greater than any potential winnings. On the other hand, a class action might be able to get a lot of fines and legal fees out of Google, well beyond any actual damage suffered, and most of which will undoubtedly go to the lawyers.


The next hearing scheduled in this case is for September, and what happens after that is anyone's guess. Of course, Congress could open up these books to public access by making some minor adjustments in the copyright law. However, this would require its members to divert precious time from chasing down their fair share of the billions of dollars in Super PAC money now available to them. That doesn't leave much time for pursuing the public interest. Besides which, Americans now determine which candidates best represent their interests by choosing the ones who collect the most special interest money. Can you blame legislators for choosing their priorities? If Google decides to just throw in the towel on this one, who could blame them? Access to the largest library ever assembled in the history of mankind is at our fingertips, and we don't even care. Ignorance begets ignorance.