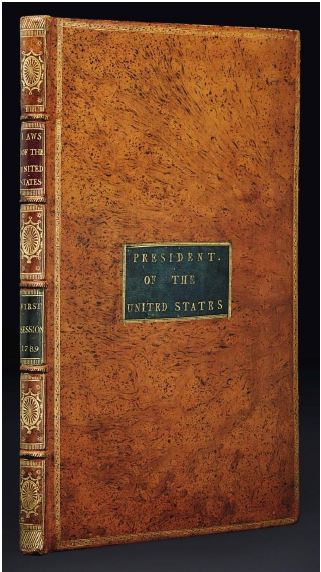 On June 22, Christie's in New York will be auctioning one of those amazing pieces of Americana one would not ever expect to see up for sale. It is George Washington's personal copy of the United States Constitution, including the Bill of Rights. America's founding father and founding document brought together in one incredible piece. Unless George had a personal copy of the Declaration of Independence, it is hard to imagine what could be better than this for an Americana collector.


Washington did not say much about the Constitution during the contentious ratification period. It was not because he had no opinions. Washington understood that he played a unique role for America. He was virtually a symbol for the nation. He did not feel he should pronounce judgments on such matters as he did not want his stature to sway the people from making their own best decisions. Nonetheless, a private letter Washington wrote to his nephew, Bushrod Washington, auctioned in 2009 by Christie's, revealed his inner thoughts about the then proposed Constitution. He was a strong supporter. He realized that each state would have its own concerns, and compromise might not be easy, but he explained that the question was “is it best for the States to unite, or not to unite?” He looked at the threats the states faced and concluded that each trying to survive the world alone would be impossible. He even thought it likely that some would be forced to return to Britain for their support.


Washington recognized the Constitution could hardly be expected to be perfect, so in his letter to his nephew, he emphasized the people's ability to amend it. That has not been done often, but some key protections have been generated that way, such as the end of slavery and the right of women to vote. Washington concluded that while bad people might try to use the Constitution to do wrong, “neither my reasoning, nor my experience, has yet been able to discover the propriety of preventing men from doing good, because there is a possibility of their doing evil.”


Washington's copy of the Constitution was printed and bound for him in 1789, the first year of his presidency. It is one of just three copies so bound by New York bookbinder Thomas Allen. However, it is the only one with “President of the United States” on the cover. The other two copies were given to Secretary of State Thomas Jefferson, and Attorney General John Jay.


Christie's describes this copy as being “in near-pristine condition, after 223 years.” There are some slight “defacements.” Washington has attached his bookplate to the endpaper. He has scribbled his name, “G Washington,” boldly on the title page. Washington has also bracketed some wording and added marginal notes, particularly regarding responsibilities of the president. George Washington took his responsibilities with the utmost seriousness. Come to think of it, Washington's personal notations only make this copy more desirable than an untouched copy. The deeper the connection with this truly remarkable man, the more important this document becomes.


Christie's has placed an estimate on the copy of $2 - $3 million. That is not cheap, though hardly expensive for a document of this significance. A Honus Wagner baseball card recently sold for $2.8 million. Honus was a great baseball player, and deserves more recognition from the fans than he receives. Nevertheless, Honus Wagner was no George Washington. We admire his play, but we revere Washington, the man.