Travel in Jamaica - Exploring the National Library in Downtown Kingston, in the year 2012 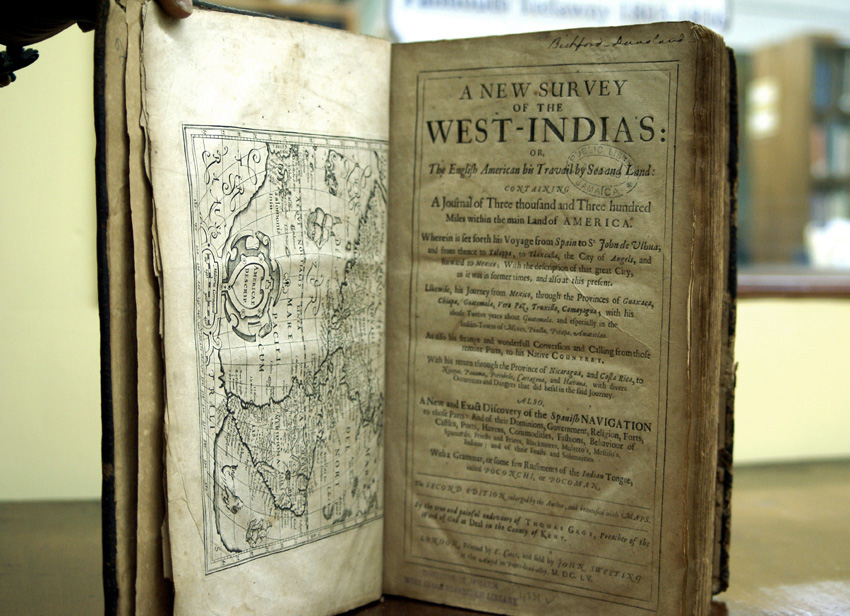 PART I : meeting Thomas Gage, the villain in a religious suit.


Jamaica, home of Bob Marley and Usain Bolt, is a dream for many American tourists. It is also a nightmare for some of its inhabitants. Far from the north coast, the polluted capital of Kingston is a urban labyrinth, haunted by squalor and loose criminals. A third-world country, Jamaica remains focused on immediate matters and can not afford to linger too long on a remote past. An unfriendly ground for old books ? Not necessarily. The National Library of Jamaica (JNL) stands, amongst other institutions, as an oasis of hope and knowledge in the heart of downtown Kingston. Located at 12 East King Street it offers a huge selection of newspapers, maps and photographs... It also shelters 47 000 books, most of them contemporary but a few dating from way back. I recently had the privilege to set my eyes upon a handful of them. The fact that I had already seen most of these books somewhere else could never spoil my pleasure. For, tell me - what sounds best ? Watching a lion in a zoo, or roaming the wild plains of Africa ? Let us learn to know Jamaica by the book(s)...


BOOK 1 : THOMAS GAGE, New Survey of the West Indias : OR, The English American his Travail by Sea and Land: containing A Journal of Three Thousand and Three Hundred Miles within the main Land of America.


Jamaica was discovered by Christopher Columbus in 1494, during his second travel. He even wrecked his ships on the north coast during his last travel, spending almost a full year in great uncertainty. But it was not until 1507 that the son of the Admiral, Diego Columbus, sent Juan de Esquivel to conquer the island. It then remained a Spanish possession until 1655, when the English captured it. This was a turning point in the history of Jamaica, partly due to a particular man, Thomas Gage. Indeed, his book published in 1648 in London played a crucial part in the conquest - no wonder the NLJ has at least 6 copies of it. When I held their 1655 copy (the second and the best edition, according to the writing on the front endpaper), I fell in love at once. The full leather binding of this small in-4° book is worn all over, the head and foot caps are both missing and the front hinge is badly rubbed. But the magnificent golden lettres on the front cover just made it for me : Public Library Jamaica. An endemic copy, deeply rooted in history.


Gage's book might pretend to the title of “ the book with the longest title ever ”. Mexico, the City of Angels, Guatemala, Chiapa, Guaxaca, Vera Paz... The title page mentions almost every town Gage visited. It also advertises a New and Exact Discovery of the Spanish Navigation as well as a Grammar (...) of the Indian Tongue... amongst other things ! Gage’s travel, it is true, was remarkable and unique. Moreri’s Dictionary states that Gage was the first non-Spanish witness to give an account from the inside of the Spanish empire in America. Another traveller, Father Labat, wrote : “we can not deny the fact that he gave us some very good insights of Mexico and its surroundings (...). Those who had written about it before had seen nothing but the shores of these countries (...) He described with great accuracy quantity of things we hitherto had no knowledge of.” Hence his nickname, the English American. From a Catholic family of England, Gage was 28 years old when he decided to embark with some missionary friends for America, in 1625. He wished to escape the wrath of his father who reproached him his parting company with the Jesuits to join the Dominicans. Hiding himself inside a tub on board of a Spanish ship, Gage eventually reached New Spain (Mexico) a few weeks later. His adventures have little in common with the bold exploits of the conquistadores. Riding a donkey, Gage preached some skeptical natives in the wilderness, visiting some convents that the monks, he wrote, had turned into harems. Moreri states that his book was “full of fancy stories about the monks of New Spain” and the dictionary of Chaudon (1804) explains that some “fictious facts and unnecessary stylistic devices irritated people of good taste against the author and the book itself.” People of good taste were also irritated at his behavior. Indeed, back to England in 1637, he put his whole dignified family to shame through his strange and wonderful conversion to the Anglican Church, as the title page of our edition reads. Gage was an opportunist and, indeed, a traitor. He was ready to do anything to make a name for himself, including sending his former Catholic friends to the gallows of Tyburn. An irritated - and Catholic - Father Labat described him as a “lying tongue”, a “heart full of ungratefulness, covetousness and wickedness”, in a few words “a villain in a religious suit.”