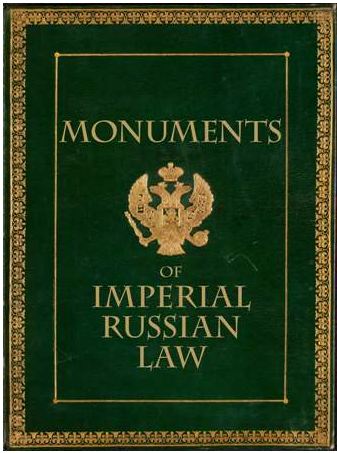 On display at the Yale Law Library.

The latest exhibition from the Yale University Law Library's Rare Book Collection is on display from now through May 25, 2012. This exhibit takes a look at Monuments of Imperial Russian Law. This brings us back to the days before the Bolshevik Revolution of 1917. Russia had built up an extensive code of law under the czars, but once the Communists came to power, they tried to bury all mention of the nation's past. There was to be no memory of those terrible days before the land became a workers' paradise.


With the fall of the Communists, Russia is again looking to its earlier past to help guide it through the post-Soviet era. According to William E. Butler, Distinguished Professor of Law and International Affairs at the Dickinson School of Law, Pennsylvania State University, “The post-Soviet era of Russian history has made the legacy of the pre-1917 era newly relevant in ways unimaginable. It is not merely a country recovering historical experience suppressed or distorted for ideological reasons during the Soviet regime, but a country seeking to modernize partly on the basis of its earlier legal legacy.” Butler is co-curator of the exhibition, along with Yale Law Rare Book Librarian Michael Widener. William Butler is the pre-eminent U.S. authority on the law of the former Soviet Union and is the author, co-author, editor, or translator of more than 120 books on Soviet, Russian, Ukrainian, and post-Soviet legal systems.


Among the items on display is a copy of the Sobornoe ulozhenie, printed in 1649. It was the first printed collection of Russian laws, and it continued to be used into the 19th century. There are also three versions of the Nakaz (Instructions). This statement of law was promulgated by Catherine II in 1767. It was patterned on the enlightenment thoughts coming out of France at the time. She actually wrote it in French. It provided for such things as equality of men before the law, and disapproved of the death penalty and torture (no wonder the Soviets didn't want to to remember their past). If not applied in all its humanitarian splendor, it was still a remarkable document for its time, and helped earn Catherine the sobriquet of “Catherine the Great” (without it she simply would have been “Catherine the Ordinary”).


The exhibit includes material from the Yale University libraries, the Harvard Law Library, and a private collection. It is open to the public daily from 9:00 am – 10:00 pm at the Lillian Goldman Law Library at the Yale Law School in New Haven.