On the Road in LA 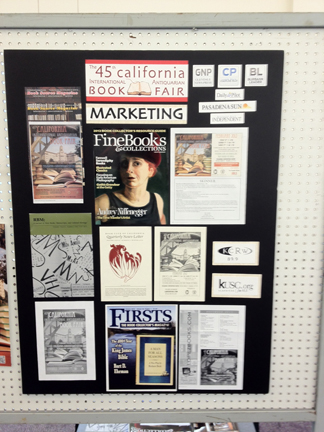 The ABAA Show - a mosaic of interests

It never rains in southern California.  That's how the song goes and that's the way it was in Pasadena, site of the Rose Bowl Parade and the Rose Bowl two months ago and the ABAA Antiquarian Book Fair a few weeks back.  The weather for the fair was gorgeous, the hotels close to the convention center, the restaurants satisfactory.  The hardest thing about the trip was controlling the TV remote in my hotel room that did everything it could to deliver a paid channel when the free ones were sufficient.  The Oakland Airport, in the San Francisco penumbra, offered quick and frequent Southwest non-stops to the Bob Hope Airport in Burbank that is only twenty minutes by cab to downtown Pasadena.  Getting there was easy.  Not buying - that was more difficult.


This year the ABAA fair moved from downtown LA into the southern California countryside, to Pasadena, a place once nearby to the entire LA metro but now made distant by the heavy traffic.  Landing at Burbank trumped the driving problem by being a slim 20 minutes by taxi to the recently rebuilt Pasadena Convention Center.


The show opened to the public on Friday, February 12th at 3:00 pm.  Admission for the first day with return privileges for the next two was $25.  Exhibiting members were given plenty of free passes that they tried hard to give to other exhibitor's best customers.  Their own best customers were much less likely to receive one.  After all, who would invite their best customers into a bookseller's feeding frenzy?  Nevertheless, the traffic was solid, the $25 an insufficient barrier to keep the motivated away.


The entrance was at the near corner of the exhibition site and its position fed most traffic straight down isle one along the right hand wall.  Lucky exhibitors in this row would see and be seen by virtually every guest.  After a while the traffic, having rounded the turn at the end of that row made its way back up row two.  At the top of row two the flow naturally turned to proceed down isle three.  In total there were eight isles and as you might expect progress was slow.  I started at 3:00 and by 8:00 pm, when the closing bell sounded, had browsed five isles.  On Saturday the fair opened at 11:00 am and I walked to the far row and worked my way back.  The final three rows took three hours, my visit concluding at 2:00 pm.  I then caught a taxi back to the airport and took a Southwest flight at 3:20 arriving in Oakland at 4:05 pm.  Efficient.